By Newsroom on October 11, 2013Comments Off on Survey Names Nestlé “World’s 5th Most Beloved Brand” 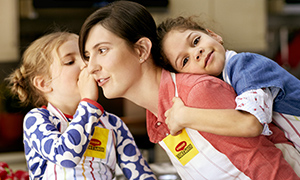 A survey of 70,000 consumers in 15 major international markets has found that Nestlé is the fifth most loved brand in the world.

Nestlé was the highest ranked food and beverage company in the research which was carried out by APCO Insight, a global opinion research company.

The rankings are the result of a decade-long research project including the global survey of more than 600 of the world’s largest corporate brands.

The key to success

Responding to the research Executive Vice President Patrice Bula said, “Good Food, Good Life is the promise we commit to everyday, everywhere – enhancing people’s lives throughout life with good food and beverages. The great efforts our people make to deliver this pledge create great results, as this research shows, by winning with consumers.”

Every day Nestlé produces around a billion products that are sold in almost every country in the world.

As the world’s leading Nutrition, Health and Wellness company, Nestlé’s products offer consumers tastier and healthier choices and has done so for nearly 150 years.

In 2012 global sales were more than CHF 92 billion. 43% of those sales were in emerging markets. 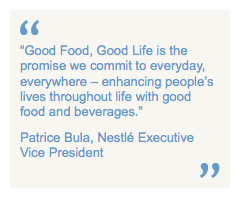 The APCO study identified eight different emotions including pride, understanding and curiosity, that are critical to effective brand communication.

The researchers named Walt Disney as the world’s most loved company, followed by Yahoo, Google and Sony. Kellogg’s was 12th, Coca Cola 14th and Pepsico 17th.

“The best brands are those that build a strong, enduring emotional attachment with consumers,” Bryan Dumont, president of APCO Insight said in a statement that accompanied the launch of the report.

The company’s “Brand Building the Nestlé Way” programme provides a framework for marketeers to build great brands that appeal to consumers.

Nestlé has also invested heavily in digital and social media to complement these efforts and drive profitable brand conversations.

Today there are more than 850 Nestlé brand pages on Facebook in addition to more than a thousand websites dedicated to the company’s brands around the world.

In total the company has around 180 million Facebook fans.

Earlier this year Nestlé was named one of the world’s top ten most reputable companies in the annual ‘Global Rep Trak’ study.

The company achieved ninth place in the study, which is designed to understand how organisations build trust and support with the general public worldwide.