By Newsroom on February 22, 2018Comments Off on Taco Bell Leaps Ahead of Burger King in Latest Fast Food Rankings by Techmonic 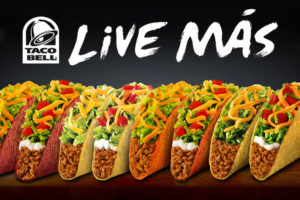 Taco Bell has won bragging rights over its fast food rival Burger King after it officially leapfrogged the chain in the latest rankings of America’s most profitable chain eateries.

The Mexican-inspired restaurant’s climb sees it sit in fourth place, behind table toppers McDonald’s, Starbucks and Subway respectively, according to Techmonic.

Taco Bell’s has found favour with Americans drawn to its tasty offer of tacos, burritos and nachos as well as a wallet friendly dollar menu which has proven popular with younger patrons hungry for a bargain.

Over the past year this has seen sales rise 5% in the US to $9.8bn, far ahead of Burger King’s relatively sedate domestic growth of 1.5%, which saw its sales fall short at just $9.3bn.

Techmonic senior principal David Henkes commented: “They certainly continue to do pretty well, and bring out some interesting and new menu items. They’ve done a good job of connecting with the millennials and Gen Z.”

Taco Bell still has a way to go if wishes to become top dog however with McDonald’s commanding an impressive $27.5bn in profits for 2017, far ahead of the likes of Starbucks and Subway which took home just $18.4bn and $10.8bn.

Taco Bell Leaps Ahead of Burger King in Latest Fast Food Rankings by Techmonic added by Newsroom on February 22, 2018
View all posts by Newsroom →