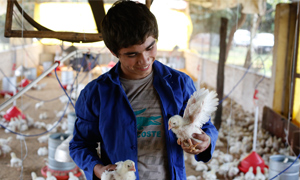 An organisation in Paraguay that aims to boost education and entrepreneurship for young people is the winner of this year’s Nestlé Prize in Creating Shared Value. Nestlé awarded the prize to Fundación Paraguaya de Cooperatión y Desarrollo for its ‘agricultural self-sufficient school’ project which ensures students receive technical and business training on top of their […]

The Greenius, or Green Genius, national competition aimed at driving forward the UK’s green growth agenda has opened and organisations are invited to compete for a share of £3 million for the development of innovative, near-market technologies leading to commercialisation. Launched by the Deputy Prime Minister in June, the contest is seeking innovative solutions to […]

Whole Foods Market has received a 2012 Green Power Leadership Award for sustained excellence from the Environmental Protection Agency (E.P.A.) for its renewable energy purchase of 800 million kilowatt-hours (kWh) last year. The annual award recognizes leading green power purchasers for their commitment and contribution to helping advance the development of the nation’s voluntary green […]