By Newsroom on July 23, 2013Comments Off on Tennent’s on the ‘T’ with Golfing Star 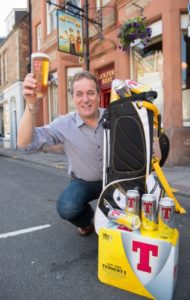 As Open hopeful Brandt Snedeker battled for the Claret Jug at this year’s championship at Muirfield, Scotland’s top brewer made sure his ‘T’ was in the bag.

After the American revealed he’s a convert to the host nation’s favourite pint last week, the Tennent’s team swung into action to drop off a golf bag with a difference at his favourite East Lothian local – the Golfers Rest in North Berwick.

Filled not with clubs, but with a supply of Tennent’s Lager, it was a gesture they’re sure Brandt would have appreciated, as he competed at the world’s most prestigious golf tournament.

Golfers Rest publican Brian Millar said: “We have really enjoyed welcoming Mr Snedeker to the town and sharing a few drinks with him at the bar. Tennent’s Lager is our top selling pint and sales soared over the Open weekend. We spoke with Snedeker’s caddie Scott Vail and decided to donate the bag to the pub’s charity campaign, which raises money for local disability charity Leuchie House.”

Paul Condron, Marketing Director at Tennent Caledonian said: “When we heard that Brandt had been enjoying Tennent’s Lager at the Golfers Rest, we wanted to make sure he had a few well-earned cans to share with his caddy and team before they headed home to the US. It’s a great idea to  donate the bag to the pub’s charity campaign, and we look forward to hearing how much they raise.”

Tennent’s on the ‘T’ with Golfing Star added by Newsroom on July 23, 2013
View all posts by Newsroom →