By Newsroom on September 4, 2013Comments Off on Tesco Criticised Over ‘Misleading’ Horsemeat Ad 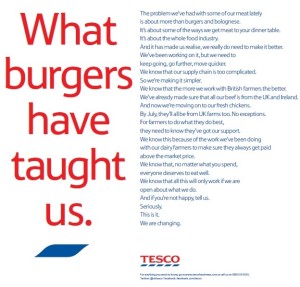 The advertising watchdog has banned a Tesco ad campaign that implied there were problems across “the whole food industry” in the wake of the horsemeat scandal.

Tesco, the UK’s largest supermarket chain, which in January ran apology adverts in newspapers for selling beefburgers that contained horse meat, ran a two-page national press campaign with the headline “What burgers have taught us”.

The ad campaign said that the problems that have arisen with meat is “about more than burgers and bolognese”. “It’s about some of the ways we get meat to your dinner table. It’s about the whole food industry,” it added.

The Advertising Standards Authority received two complaints, one from an independent butcher, that the ad was misleading in implying that there were issues with meat standards across the whole food industry.

Tesco said that the ad was designed to show that it was serious about the horsemeat issue and was listening to the public. It ended with the line: “We know that our supply chain is too complicated. So we’re making it simpler … Seriously. This is it. We are changing.”

The company said that although not everyone in the food industry had been implicated in selling horsemeat, each time testing was rolled out into another sector further meat contamination had been found.

The ASA said that the ad featured words such as “we” and “our” to focus on Tesco – but had omitted them in the line “It’s about the whole food industry” – which gave consumers a different understanding of the rest of the ad.

“Therefore, we concluded consumers would understand the ad referenced all food retailers and suppliers, rather than Tesco alone,” said the ASA.

“Because the ad implied that all retailers and suppliers were likely to have sold products contaminated with horse meat, and because relatively few instances of contamination had been identified at the time the ad appeared, we concluded the ad was misleading.”

The ASA banned the ad campaign.

Tesco Criticised Over ‘Misleading’ Horsemeat Ad added by Newsroom on September 4, 2013
View all posts by Newsroom →