By Newsroom on January 11, 2016Comments Off on The Monkeys Unveil ‘Operation Boomerang’ For Australia Day Lamb Push

Their mission: to save Australians abroad from going without a lamb barbecue on Australia Day.

Operation Boomerang was the brainchild of commander Lee Lin Chin. Having spent Australia Day 1996 in Warsaw, without ‘a chargrilled chop in sight’, she vowed to ‘never let that happen to another Australian again’.

Cut to present day, when Chin’s army, including Sam Kekovich and Fitzy & Wippa, commences its calling to save as many overseas Aussies as possible. Other notable Aussies such as rugby player Stephen Moore, acclaimed cricketer Mitchell Johnson and someone who may or may not be Princess Mary feature throughout the content. 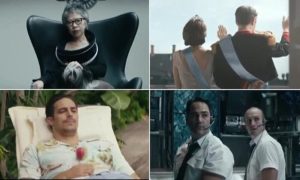 As the troops land back on home soil, they’re met with a message from the ‘Prime Minister’ and a delicious lamb barbecue, manned by chef George Calombaris. Because after all, you never lamb alone on Australia Day.

Says Scott Nowell, Executive Creative Director, The Monkeys: “Australia Day is a day for coming together over lamb. This year the thought was around what about the Australia Day orphans – all those ex-pats in foreign countries, cold and alone on January 26th, missing out on a lamb barbecue with their friends or family. Then it was about how we could get them back home with their loved ones this Australia Day.”

The Australia Day campaign will be supported on-air via a major radio partnership with The Nova Network’s Fitzy & Wippa show. Airing from Monday 11 January through to Australia Day, the hosts are showing their commitment to the Operation Boomerang theme by airing from London throughout the first week, and seeking out overseas Australians to be flown home for Australia Day and a lamb BBQ.

Additional media spend will also see the ad pushed out across digital, social and TV, whilst PR will spread the message across earned media. In-store, product-focused point-of-sale will deliver lamb BBQ inspiration, focusing on a selection of different cuts.

Says Andrew Howie, Group Marketing Manager, Meat and Livestock Australia: “We’ve had a blast bringing this campaign to life with The Monkeys. The Australia Day Lamb campaign is now in its twelfth year. The challenge of evolving the campaign to ensure it remains relevant each year is certainly a fun one to have. This year’s campaign continues to highlight the value MLA places on brave creativity. Kookoo Koo.”

The Monkeys Unveil ‘Operation Boomerang’ For Australia Day Lamb Push added by Newsroom on January 11, 2016
View all posts by Newsroom →