By Newsroom on February 27, 2014Comments Off on Theakston’s Black Bull In Paradise Named CAMRA Pub Of The Season 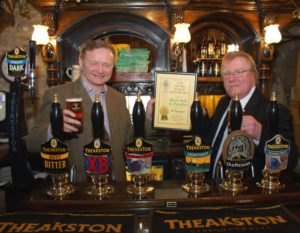 A pressure group devoted to promoting and supporting the real ale industry has given a top regional award to Masham brewer T&R Theakston Ltd.

The Harrogate & Ripon branch of the Campaign for Real Ale (CAMRA) has named Theakston’s Black Bull in Paradise, Masham, its “Autumn Pub Of The Season 2013”.

The pub, which also incorporates a shop, cooperage and hugely popular visitor centre, beat off stiff competition from in excess of 200 other establishments to lift the title.

The award was presented by CAMRA’s Harrogate & Ripon chairman, Allan Gauld, to T&R Theakston Ltd’s Executive Director, Simon Theakston, at a ceremony in the pub, attended by staff and members of the CAMRA judging panel.

Mr Gauld said: “More than 200 establishments were put forward for the accolade and, after looking at, and visiting, the serious contenders, we are delighted to present Theakston’s Black Bull in Paradise with The Autumn Pub Of The Season 2013 award. We felt that the history, the unique visitor element, and close proximity to the busy working brewery, made the Black Bull in Paradise stand out above the rest. It also serves a refreshing range of Theakston’s real ales!”

Mr Gauld added: “The beer and pub industry needs to be protected and cherished. It provides approximately 900,000 jobs up and down the UK, and one job in a brewery creates one job in retailing, one job in agriculture and 18 jobs in pubs and bars. The industry is responsible for £22bn worth of the UK’s gross domestic product, provides great social and cultural benefits, and in turn generates £12bn of tax for the exchequer. 2013 was the first year since 1959 that we have had a reduction in beer duty, and we are hoping the Chancellor will freeze beer duty in the Budget.”

“On behalf of all the staff at Theakston’s, I’m delighted to accept this great honour from the Harrogate & Ripon branch of CAMRA. The Black Bull in Paradise is a window into our company and as such is a vitally important part of what we do. Each year we welcome many thousands of visitors from all over the country and indeed the world. I am therefore delighted that the brilliant work of our team has been so publically recognised by our friends at CAMRA”.

Theakston’s Black Bull In Paradise Named CAMRA Pub Of The Season added by Newsroom on February 27, 2014
View all posts by Newsroom →