By Newsroom on August 11, 2016Comments Off on This Japanese Spot for Nissin Ramen Explodes Ad Fads

“SamuraiDroneCatIdolSuperhumanRubeGoldbergViewerWarningTooExplosiveHighSchoolGirl”. This new spot for Japanese noodle brand Nissin Chikin Ramen may be a bit of a mouthful, but it’s an explosive eyeful too. 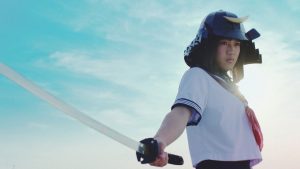 Crammed with references to recent hit Japanese ads and popping with pop culture, it’s a frenetic race through hits such as the award winning Shisheido ‘High School Girl’, the parkour-crazy viral for NTT Plala and the brilliantly demented ‘Definition of Japanese Kawaii’. It also takes pot shots at overplayed advertising fads, like drones, Rube Goldberg machines and soppy dads – the follow up is bound to include a VR version, right?

The creative pokes fun at trend-chasing ads, ending on the strapline ‘a lot of things buzz and go, but we know things that are loved last for ever/ Not a trend but a taste that is loved’. It’s a nod to the brand’s 58th anniversary, which takes place on the 25th of August.

The spot was produced by TOKYO, a division of Taiyo Kikaku. It was directed by Yoshihito Mori, who has brought a cinematic shine to a gleefully silly concept. It’s also a complex production, pulling together a diversity of settings, characters and genres – so hats off to producer Maiko Shimada.

Check out some of the reference spots below:

This Japanese Spot for Nissin Ramen Explodes Ad Fads added by Newsroom on August 11, 2016
View all posts by Newsroom →