By Newsroom on February 24, 2017Comments Off on Toast Ale is Turning Bread into Beer for National Toast Day in the UK

To celebrate National Toast Day, the UK’s first bread to beer ale launched a Crowdfunder to allow them to add to their range of eco-friendly beer. Toast Ale uses unsold, surplus fresh bread, otherwise thrown away by bakeries and sandwich makers to create its popular taste. 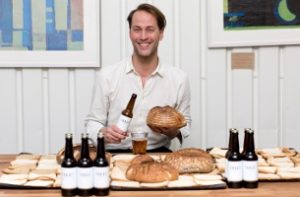 The innovative craft beer company – founded by Tristram Stuart, Feedback founder – aims to significantly reduce the scandalous 46 million slices of bread currently thrown away every day. Started one year ago, on the 22 January 2016, with Toast Pale Ale, they now aim to expand and produce Toast Craft Lager and Toast Session IPA – a beverage with a cause for all beer lovers.

All that craft beer and charitable fans alike need to do to help Toast add to its product line and speed up the end to food waste is give to the crowdfunder to help Toast reach the target of £20,000. A small price to pay to put an end to the nation’s food wastage problem. 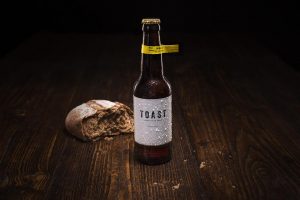 Across the country we waste almost 15 million tons of food with bread being the worst offender. In our very own homes the current level of bakery items thrown in the bin is enough to lift 26 million people globally out of malnutrition. Toast wants to put an end to this and already has some likeminded celebrity fans such as Jamie Oliver and Hugh Fearnley-Whittingstall.

Toast Ale is putting this surplus bread to good use, and 100% of profits go straight to food waste charity Feedback. After founding Feedback, Tristram Stuart turned to Toast and even published the recipe in a bid to kick start a global brewing movement to turn surplus bread into beer. 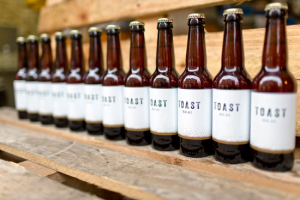 The fresh, surplus bread is brewed with malted barley, British hops and yeast to make a quality ale with a distinctive taste profile. Each 330ml bottle uses the equivalent of one slice of bread.

Rob Wilson, Chief Toast at Toast Ale said: “Both tackling the global issue of food waste and brewing a genuinely delicious ale are at the heart of Toast. Adding more brews to the range will mean that more surplus bread has a use, more money will be made for Feedback, and there will be two more great drinks for people to enjoy. We hope to put ourselves out of business – the day there’s no waste bread is the day Toast Ale can no longer exist.” 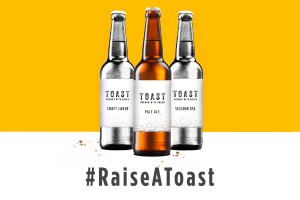 Hugh Fearnley-Whittingstall said “I’m all for making good things out of food that would otherwise go to waste. And making beer out of surplus bread seems like an excellent idea to me. So good luck with your crowd fund. And if all goes well, then I’m really looking forward to helping you out with your waste feast. It’ll be a great opportunity to meet your supporters, save some delicious food from being wasted, and of course toast your crowd fund success with a few bottles of Toast!”

Toast Ale is Turning Bread into Beer for National Toast Day in the UK added by Newsroom on February 24, 2017
View all posts by Newsroom →