By Newsroom on March 21, 2013Comments Off on Tostitos: Men Are The Biggest Offenders Of Double-Dipping 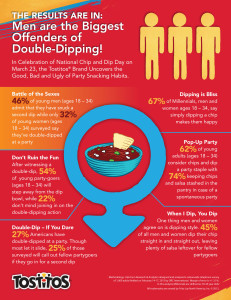 No bowl is safe with nearly half of Millennial men, ages 18-34, admitting to conducting the biggest party foul in the book: double-dipping.

To celebrate National Chip and Dip Day on March 23, Tostitos, a leading brand from PepsiCo’s Frito-Lay division, conducted a survey with ORC International interviewing more than 1,000 Americans from Feb. 14-17, 2013, about their chip-dipping habits.

Other key findings from the survey include:

“The Tostitos brand couldn’t think of a better way to celebrate National Chip and Dip Day than to unearth the secret party-snacking habits of our fans,” said Tony Matta, Vice President of marketing, Frito-Lay North America.

“While we don’t condone double-dipping, we encourage our fans to get together and dial up that party.”

Tostitos: Men Are The Biggest Offenders Of Double-Dipping added by Newsroom on March 21, 2013
View all posts by Newsroom →