By Newsroom on May 19, 2014Comments Off on TV Personality Gizzi Erskine Stars In New Nescafé Dolce Gusto Campaign

Gizzi is best known for her series on Channel 4 “Cook Yourself Thin” and her bestselling cookery book Skinny Weeks and Weekend Feasts. 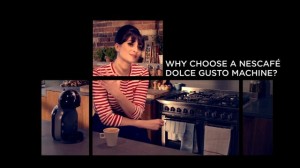 Loco’s editor, Jon Davey and director, Darren Statman designed a playful layout that would slide panels of beautifully shot footage across the screen. The colour grade by Kenny Gibb and Jon tinted the images to echo the brand’s multicoloured coffee pods.

Animator Lee Bamsey created a motion graphics sequence to highlight the range of flavours in a flickering polka-dot pattern of cheerful pod colours. The look and feel of the post-production combined with the music to create a retro 60s vibe that chimed perfectly with Gizzi’s personal style and the elegant coffee machine.