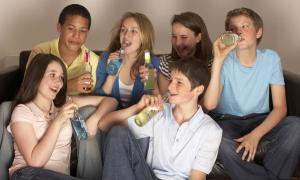 Underage drinking among America’s youth is at record lows, according to the latest National Survey on Drug Use and Health.

More than 1.5 million (1,525,000) fewer American youth between the ages of 12 and 17 years old — more than the entire population of New Hampshire — reported they consumed alcohol in the past month, according to the most recent estimates from the study, which the Substance Abuse and Mental Health Services Administration released on Thursday. Past-month alcohol consumption among 12- to 17-year-olds declined 34 percent proportionally from 2003 to 2013 and 10 percent from 2012 to 2013, according to the study.

“These numbers are encouraging, to say the least, and show that the efforts made by parents, teachers, public officials, law enforcement and other organizations continue to make a meaningful, and, frankly, substantial impact on not only our youth, but also the future of the country as a whole,” said Ralph Blackman, president and CEO of the Foundation for Advancing Alcohol Responsibility. “But there’s more work to be done, and more conversations between parents and kids need to be started.” 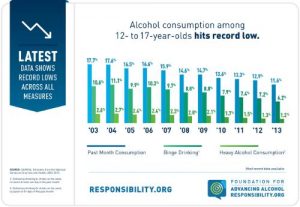 SAMHSA’s overview of the latest NSDUH results also revealed alcohol consumption among America’s youth hit record lows across all reported measures. The study found binge drinking among youth declined 42 percent proportionally from 2003 to 2013, a difference of more than one million (1,058,000) 12- to 17-year-olds. Further, the study found a 14-percent decline in binge drinking among youth from 2012 to 2013.

Heavy alcohol consumption, which is defined as drinking five or more drinks on the same occasion on five or more days in the last month, among youth declined 54 percent proportionally from 2003 to 2013, a difference of approximately 359,000 12- to 17-year-olds, according to the study.