By Newsroom on October 9, 2013Comments Off on UK Starbucks Debuts ‘Duffin’, Slandered For Stealing Idea From Local Bakery 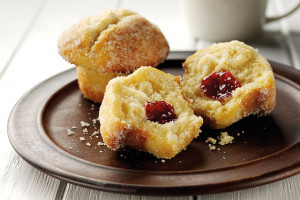 When UK Starbucks chains debuted their new ‘Duffin’ pastry—a doughnut-muffin fusion with a raspberry jam filling, they didn’t know how much of a ruckus it would cause.

Shortly after the debut, local English bakery Bea’s of Bloomsbury declared it a ripoff, claiming to have been making ‘duffins’ long before Starbucks started selling them. The bakery owners were also enraged by the fact that Starbucks would trademark the name and prevent them from selling ‘duffins’ in their stores.

The bakery began to rally support via social media under the #duffingate hashtag, and the protest has since spiraled into an attack on Starbucks that includes a deluge of criticism, and threats to boycott the coffee chain.

Starbucks insists that it had not known about the pre-existing ‘duffins’, and plans to release a statement to allow the bakery to keep the name.

Is this another case of big-company-trampling-small-business, or a huge overreaction?

Scroll through some of the #duffingate tweets for the latest on the saga.