Valentin Bianchi Brings “Leo” To The US

By Newsroom on October 11, 2013Comments Off on Valentin Bianchi Brings “Leo” To The US 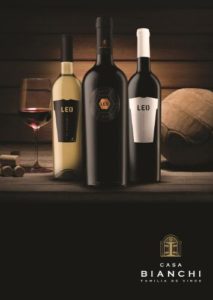 In the world of “futbol,” as the sport of soccer is known in every country except the United States, Lionel (Leo) Messi, the Argentine-born soccer superstar, is considered the “best of the best” on the field, especially after winning a record five “World Player of the Year” titles.

He has the same reputation off the field because of his charity work, especially for his youngest fans. In 2008, he started the Leo Messi Foundation, which has worked tirelessly to forward its mission to help at-risk children and adolescents.

It is in cooperation with his Foundation that Bodega Valentin Bianchi, one of Argentina’s oldest and best-known family-owned wine companies, debuts its LEO label in the United States.

The two reds, a Malbec and a Premium Malbec, will be available in major markets around the country starting in October, with a white Torrontes coming in early 2014.  The label and the wines were first introduced in Argentina and Europe in 2012, with profits from the wines being diverted to the Foundation.

According to Raul Bianchi, co-owner with his family of Valentin Bianchi, “This venture is collaborating with the Leo Messi Foundation in order to continue creating projects focused on infant health and education, as well as establishing sporting activity as a key part of the fight against poverty and vulnerability.”

On a black glass bottle, the image of Leo’s white jersey stands out as the front label for LEO Malbec, with the wine inside 100% Malbec from Bianchi’s Estate vineyards in the San Rafael district in the southernmost part of the famed Mendoza wine region. The LEO Torrontes, 100% its varietal from the aforementioned Bianchi vineyards, will be in a clear bottle with the same soccer shirt from the LEO Malbec bottle; this time in black.

The LEO Premium Malbec, with a cut-out image of a soccer ball against the black glass bottle, also is “100% Malbec” that spends a year ageing in a combination of French and American oak, with an additional six months bottle ageing before release. Valentin Bianchi’s LEO wines are sure to be winners among soccer fans, especially as unique gifts during the upcoming holiday season and in anticipation of 2014’s World Cup games.

Valentin Bianchi Brings “Leo” To The US added by Newsroom on October 11, 2013
View all posts by Newsroom →