By Newsroom on April 11, 2016Comments Off on Walkers Shortbread Commemorate Queen’s 90th with ‘Special Edition’ Carton 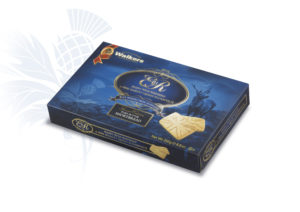 Scotland’s biggest food exporter Walkers Shortbread have unveiled a new limited edition carton design in commemoration of Queen Elizabeth II’s 90th birthday, which falls on the 21st April. With its striking royal blue design, the ‘Special Edition’ design represents a far departure from the traditional tartan carton that has been the calling card of Walkers and many other shortbread brands for years.

This nod to the monarchy is not a first for Walkers who have a history of celebrating royal imagery. As recently as September 2015 they released a limited edition carton in celebration of Queen Elizabeth becoming the longest-reigning British monarch.

Their latest design is devised by London-based creative consultancy DECIDE., and seeks to incorporate Walkers’ Scottish heritage into the commemorative design.

“The introduction of a Royal Blue background and the ‘Happy 90th Birthday’ name styling supported with ‘Special Edition’ announcement reinforce the premium positioning of the Royal celebration carton. The imagery of the stag, heather and Highland background, thistle watermark and ‘Best Wishes from Scotland’ banner, supported with back of pack copy which alludes to the unique relationship between the Royals and the Scots endorse the product’s Scottish credentials.”

“The design features a classic ‘cameo’ holding panel device housing hand-crafted typographic and calligraphic styling to communicate the brand’s traditional values of quality. The carton is designed to be visually consistent with Walkers’ Core brand architecture so that the Special Edition is clearly from the same brand stable.”