By Newsroom on September 11, 2015Comments Off on Welsh Lamb Launches New TV Campaign & Strapline with AgencyUK

The ad features three generations of a family enjoying lunch when lamb is brought to the table, prompting the family toddler to announce “Lamb!” While his doting mother celebrates the little boy’s first word, his foodie father is less impressed, setting the boy straight on the provenance of “Welsh Lamb”. 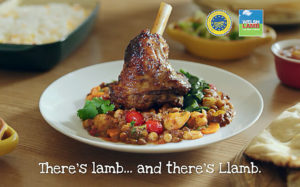 The ad was written by AgencyUK creatives Zane Radcliffe and Jake Pole and directed through MTP by Damien O’Donnell, best known for his feature film East is East. The TV ad, entitled ‘First words’, also features the brand’s new strapline: ‘There’s lamb… and there’s Llamb’, drawing on the frequent use of double-L in the Welsh language.

Radcliffe said: “Reclassifying Welsh lamb as ‘Llamb’ just seemed like a wonderfully simple shorthand that sets the brand apart. We were tickled by the idea of taking a classic family moment – the shared joy in a child’s first word – and turning it on its head.”

The ad will be aired on a total of 26 varied satellite and cable channels including S4C, Sky News, Channel 5 and More4 for a period of six weeks, garnering an estimated 15 million viewers. The TV ad is also supported by outdoor, online and social content.