By Newsroom on June 18, 2015Comments Off on Wunderman Taiwan Create Buzz for Honey Beer with Some Bee Drones

To raise awareness and encourage trial of Honey Beer, the latest product line from Taiwan Beer, Wunderman Taiwan transformed several drones into mechanical bees. These bee drones could take flight, and were dispatched to help deliver six-packs directly to consumers’ offices — a one-of-a-kind, online-to-offline experience that had never before been done in Taipei!

“The liquor market in Taiwan is quite mature and new products are easily overlooked,” said Jeff Wen, vice president of accounts, Wunderman Taiwan. “Our client had also launched fruit-flavoured beer before, and was worried that the new Honey Beer would get lost in the mix. The challenge we faced here was having to draw consumers’ attention and create social buzz before the product was even released.”

Wunderman Taiwan aimed not only to get people talking about the beer, but also to get them to drink it.

“There’s great power in fan advocacy and peer reviews,” said Paul Hung, executive creative director, Wunderman Taiwan, “and the first step to turning people into believers is having them try the product out for themselves. This is why we wanted to encourage as many people as possible to try Honey Beer and share the news with their friends.”

Wunderman Taiwan asked office workers, the primary target audience, to apply online if they wanted to score free beer for themselves and their colleagues. The agency then sent out bee drones and had them hover outside applicants’ windows or even fly into the offices to announce the arrival of the beer. This created buzz throughout the office about the appearance of these mysterious bees.

To create more opportunities for social sharing, Wunderman Taiwan used Google Street View technology to superimpose bees onto images of people’s workplaces. Applicants who keyed in their addresses could generate these images and subsequently share them on social media.

On weekends, blind-tasting events were held in the busiest parts of Taipei. The unbranded beer cans were left bare, except for a QR code. The code led to the campaign site, driving offline-to-online promotion. 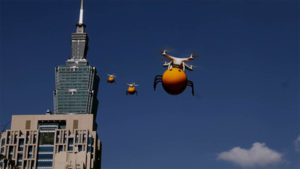 Around 15,000 people signed up for the drone delivery service within just 10 days. Several media outlets, such as news channels GTV and TTV, covered the campaign and street activation. The beer even went out of stock three days before its official launch! Most important, after the product launch, the sales of Honey Beer were four times better than all previous Taiwan Beer launches.

Wunderman Taiwan Create Buzz for Honey Beer with Some Bee Drones added by Newsroom on June 18, 2015
View all posts by Newsroom →