A Machine That Only Brews Coffee When Two People Introduce Themselves

By Newsroom on April 9, 2014Comments Off on A Machine That Only Brews Coffee When Two People Introduce Themselves

Anyone who has ever attended a conference or a networking event will know how awkward and intimidating they can be.

To help break the ice for participants, the Economic Development Board of Singapore (EDB) came up with the ‘Coffee Connector’, a coffee machine that only brews coffee when two people introduce themselves to each other. 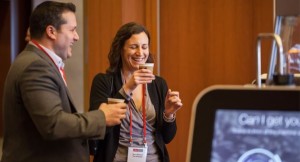 The machine senses when two people are standing in front of it and asks them to introduce themselves by inputting their names. It then starts the brewing process and the two can watch their coffees being made through the machine’s exposed mechanics. The idea is that this facilitates conversation, with both parties benefiting from a new connection and a customized cup of joe.

It was created in collaboration with Singapore-based The Secret Little Agency, New York City-based StrawberryFrog, and Rhode Island creative technology firm TellArt. In a nod to its Singaporean roots, it uses Highlander Coffee’s Supremo Blend beans. 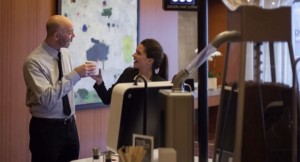 “‘Let’s grab coffee’ often means more than just coffee. It signifies the start to relationships, opportunities and business decisions. In Asia, Singapore often facilitates connections between companies and successful business ventures with a wealth of resources. Our machine, the Coffee Connector, is this symbolic idea brought to life,” said EDB.

The ‘Coffee Connector’ made its debut at The Economist Big Rethink Conference in New York City on 13 March, facilitating over 200 successful connections in total.

A Machine That Only Brews Coffee When Two People Introduce Themselves added by Newsroom on April 9, 2014
View all posts by Newsroom →