By Newsroom on May 1, 2013Comments Off on A Sweet Solution For Diabetics

British company Sweetly Stevia Ltd has launched a natural sweetener made from the Stevia Rebaudiana Bertoni plant. It is now offering the opportunity for smaller investors to participate in this exciting and rapidly developing market.

Shares in Sweetly are to be launched through a crowd funding investment platform. Often described as ‘democratic finance’, it is a process that allows businesses of all forms and sizes access to funds, whilst bypassing traditional banking institutions.

Sweetly has developed a sweetener, which is made mainly of Steviol glycoside plant extracts, having up to 300 times the sweetness of sugar. 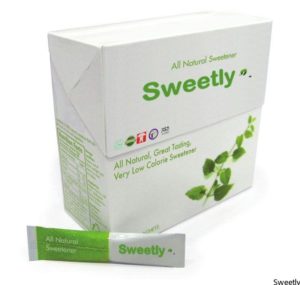 Since stevia has a negligible effect on blood glucose, it is attractive as a natural sweetener for people on carbohydrate-controlled diets, such as diabetics.

Sweetly is a sustainable raw material for the food industry that can satisfy the public’s desire for all things sweet. Using absolutely no carcinogenic or artificial components, the market potential for this natural sweetener remains untapped.

The Sweetly shares will offer potential returns that are higher than those generally achieved through mainstream investment products.

Investors can invest any amount starting from just £50, and such investments can benefit from HM Revenue & Customs approved tax relief. The equity shares can be purchased at here.

But it isn’t all about the money. The Sweetly company is also about building an ethical business offering a more healthy diet for all, a natural alternative for diabetics, whilst at the same time benefiting farmers by creating wealth in traditionally poor areas of the world

Under proper growing conditions, stevia leaves can be harvested up to four times a year—and they are always harvested by hand. Each hectare hosts 110,000 stevia plants and produce 7,500 kilograms of dry leaves. In terms of sweetening power, one hectare of stevia is the equivalent of 60 to 90 hectares of sugar cane!

Not all stevia are created equally. Sweetly have the highest stevia purity achieved through a completely natural, water process, free of organic solvents and enzymes, makes sweetly excellent tasting product, also the cost is lower than artificial sweeteners on the market

Stevia products are now approved for use within the European Union. A healthy alternative to artificially make sweeteners, Sweetly stevia has no known side effects or health risks.

Stevia products currently account for 49% of the sweetener market in Japan , a market which is subject to strict safety restrictions.

A Sweet Solution For Diabetics added by Newsroom on May 1, 2013
View all posts by Newsroom →