By Newsroom on August 22, 2013Comments Off on A Vending Machine That Dispenses French Fries 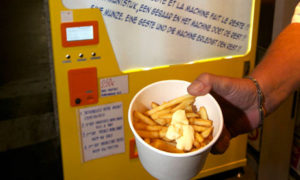 Belgium has long claimed that its frites are the first and the best; now it is boasting a world food-vending first – a coin-operated dispenser that produces hot chips using beef fat.

Although chips are already sold this way in other countries, the machine outside a supermarket in Brussels adopts the gold-standard animal dripping, as well as vegetable oil, and may just be the first step in competition for Belgium’s street frite vendors.

“This device was tested in India and in Romania,” Tuline Bey of distributor BreakTime Solutions told La Dernière Heure newspaper, adding that further 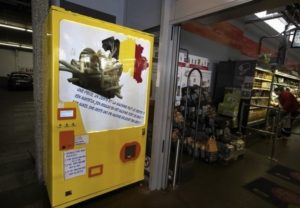 development had been needed for the use of beef fat. Croquettes may soon be provided too.

Customers pay €2.50 (£2.13) for a 90-second fry-up of a 135g portion of chips accompanied by fork, salt and ketchup or mayonnaise, with or without harissa, but definitely without the customary moules. Three filters are meant to cut out the smell of the frying.

Belgians say frites were invented in the late 17th century and blame the French fries reference on British and American soldiers fighting in French-speaking areas of the country during the first world war. Another more esoteric explanation from Belgium’s tourism chiefs is that the name came from a linguistic misunderstanding – in old English “to French” meant to “cut into sticks”.

A Vending Machine That Dispenses French Fries added by Newsroom on August 22, 2013
View all posts by Newsroom →