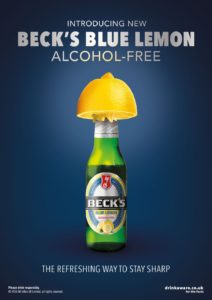 AB InBev UK has launched Beck’s Blue Lemon – a great tasting alcohol-free beer brewed to give consumers the same crisp, fresh taste of Beck’s Blue, but with an added twist of lemon. The launch follows the announcement of AB InBev’s Global Smart Drinking Goals, with the leading brewer committing to ensure that at least 20% of its global beer volumes are low-to-no alcohol by 2020.

Available in 6x275ml format in Sainsbury’s stores across the country, Beck’s Blue Lemon is brewed under the same exacting standards as traditional Beck’s – but alcohol-free, yielding a full bodied and refreshing flavour with a splash of natural lemon to help keep consumers sharp.

In the Off-Trade, low-to-no alcohol beer sales are growing at 11.1%. Becks Blue is the market leader, contributing to 65% of the sector and growing ahead of the category at 15.4% – delivering 86.5% of the total category’s growth.

Aina Fuller, Senior Brand Manager at AB InBev, comments on the launch: “Launching Beck’s Blue Lemon is about encouraging consumers to make smart drinking choices by providing further choice. The Beck’s brand is all about its German heritage and being progressive – so we are motivating our consumers to twist it up, drinking Beck’s Blue Lemon as an alternative when they are looking to stay sharp and moderate their drinking. 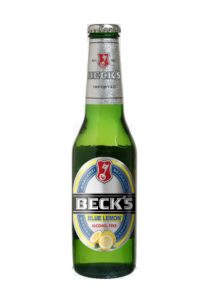 “Lots of consumers don’t realise that Beck’s Blue and Beck’s Blue Lemon are beers in every sense of the word – just alcohol free. They still use the same four key ingredients – barley, hops, yeast and water, and go through the traditional brewing process. The only difference is that they undergo a special and gentle de-alcolisation process to remove the alcohol from the beer but maintain the great taste and flavour.”

Research conducted by AB InBev in December revealed the growing popularity of low and no alcohol beer among the British public, with nearly a third of Brits (32%) having tried it and one in ten women (10%) enjoying it on a weekly basis. The category is also growing in popularity among millennials, with over a fifth (21%) of those aged 18 to 34 likely to choose alcohol-free beer from January.

Beck’s Blue Lemon is available in Sainsbury’s stores now and will be rolled out across other retailers in the coming months.