By Newsroom on January 25, 2017Comments Off on adam&eveDDB Brings a Dash of Romance to Skittles’ Super Bowl Ad 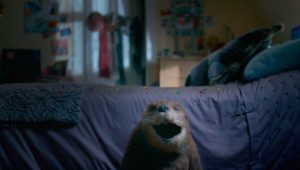 The 30-second ad is Skittles’ take on a love story. It features a hopeless romantic trying to woo his crush from outside her window, with the help of Skittles. He ends up wooing more than the girl.

This is just the third time Skittles has advertised in the Super Bowl. The brand returned in 2016 with its “Portrait” Super Bowl ad starring Steven Tyler, and announced recently it held the spot as the No. 1 selling non-chocolate confection brand.

The new ad was made by ad agency adam&eveDDB, and will air during the game’s first quarter.

adam&eveDDB Brings a Dash of Romance to Skittles’ Super Bowl Ad added by Newsroom on January 25, 2017
View all posts by Newsroom →