By Newsroom on July 3, 2014Comments Off on American Heritage Chocolate Serves Up Brownies On July 4 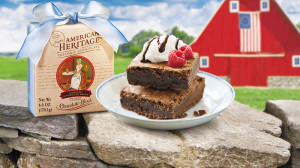 Chocolate has been woven through the fabric of American culture for centuries. Its rich history is intertwined in the stories of our founding fathers, and ultimately, the history of the Americas. This year marks the 238th anniversary of the signing of the Declaration of Independence – an act that sparked the revolution that freed the colonists from British rule – and declaration signers Benjamin Franklin, John Adams and Thomas Jefferson were all renowned chocolate lovers.

Today, American families across the country will be celebrating Independence Day with fun, fireworks and food. American Heritage Chocolate—an authentic historic line of products that celebrates chocolate’s important role in the lives of Americans during the 18th century—is a popular ingredient for desserts, including everyone’s favorite – Chocolate brownies!

Brownies first originated in Chicago, IL in 1893 when Mrs. Bertha Palmer introduced a new way of enjoying chocolate via her husband’s Palmer House Hotel. She asked the chef to make a “ladies’ dessert” that was edible without getting a lady’s gloved fingers dirty. The “brownie” is still served at the Hilton Palmer House today.

To celebrate this July 4, Mars, Incorporated are sharing a recipe for this truly American dessert made with American Heritage Chocolate.

If you want to experience chocolate history first hand, this July 4, Mars Chocolate History Ambassadors will be on hand at The National Archives in Washington, DC, demonstrating chocolate’s rich history as part of the site’s full day of festivities, and there will even be tasting!

American Heritage Chocolate Serves Up Brownies On July 4 added by Newsroom on July 3, 2014
View all posts by Newsroom →