By Newsroom on November 15, 2018Comments Off on Ana de Armas Revealed as the Star of Campari Red Diaries 2019

Campari, the iconic Italian aperitif, announces the return of Campari Red Diaries 2019 with Entering Red; a short movie featuring a Hollywood actress in the lead and award-winning talent at the director’s chair.

Fuelled with mystery and romance, viewers are taken on an unexpected journey of discovery into the world of Campari as “every cocktail tells a story.” Entering Red not only tells a tale of intrigue, it is also an ode to the iconic Negroni, Campari’s signature cocktail marking its 100th anniversary in 2019.

Starring internationally renowned actress Ana de Armas from blockbuster film Blade Runner 2049, Italian actor Lorenzo Richelmy, and directed by award-winning Italian director Matteo Garrone whose latest film Dogman (2018) received the Best Actor prize at Cannes and has been submitted by Italy for the 2019 Academy Award for Best Foreign Language Film, the short film will be the core element of an integrated campaign.

As a sponsor of the Venice International Film Festival of La Biennale di Venezia, this comes as an exciting addition to Campari’s storied history.

Entering Red is an intriguing story where viewers will ‘enter red’ with Ana as she discovers the unexpected, enchanting world of Campari while exploring Milan, the birthplace of the iconic vibrant red aperitif, in a historic year marking the 100th anniversary of the Negroni. 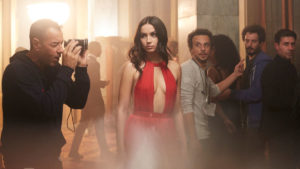 The cinematographic experience is heightened by Matteo Garrone’s talent behind the camera and De Armas perfectly depicts the character’s evolution.

The cast this year will also welcome cameos from Campari’s “Red Hands” – a collection of six of the world’s best bartenders, and social influencers in front of the camera for the first time, including Stacey Swenson and Giaro Giarratana, who represent the United States respectively.

Lead protagonist Ana de Armas comments: “It’s an incredible honour to be a part of this short movie,Entering Red, and the Campari Red Diaries campaign. It was also a privilege to work with acclaimed Director, Matteo Garrone. I loved playing a character that showed such passion and curiosity on her journey of discovery in the beautiful city of Milan.” 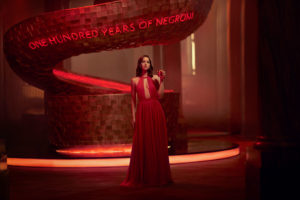 Director Matteo Garrone comments: “This year’s film is set to bring to life the intriguing journey that is the discovery of Campari. It was an honour and a challenge to be given this responsibility in such a pivotal year for the brand, celebrating two truly Italian icons recognised worldwide. A Negroni does not exist without Campari, and so to tell the story, entering the red bittersweet drink is where it all begins.”

Bob Kunze-Concewitz, Chief Executive Officer of Campari Group: “Our cocktails are more than just a drink, they each tell a story, and this year as we are celebrating the Negroni turning 100 years old, Campari Red Diaries will bring the cocktail to life, and take viewers on a journey as they enter the red. The iconic serve, in which Campari is a key defining ingredient, has created a great legacy and it will be amazing to see it all brought to life, with the support of great talent, Ana de Armas and Matteo Garrone, but also by bartenders and Campari advocates from around the world.”

Entering Red will premier in its birthplace, Milan, with a red-carpet event on February 5th, 2019.  A simultaneous digital launch worldwide will take place with the short film available to view on Campari’s official YouTube channel on the same date.

Ana de Armas Revealed as the Star of Campari Red Diaries 2019 added by Newsroom on November 15, 2018
View all posts by Newsroom →