Bacardi and Swizz Beatz Team Up for Lifestyle and Culture Role

By Newsroom on July 11, 2016Comments Off on Bacardi and Swizz Beatz Team Up for Lifestyle and Culture Role 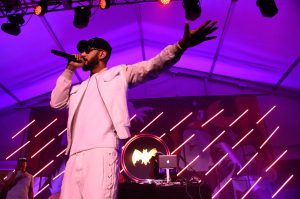 Spirits producer Bacardi and multiplatform artist Swizz Beatz have joined forces to deliver events, marketing and social activations with industry influencers in exciting and new ways. In a multi-year agreement, Bacardi has named the multifaceted entrepreneur, artist, art collector and Grammy award-winning music producer Global Chief Creative for Culture for Bacardi with oversight for the entire Bacardi portfolio of brands.

The deal is a first-of-its-kind move for the drinks company and combines the international power of the iconic brands in the premium Bacardi portfolio with the worldwide cultural influence of Swizz Beatz. The goal is to develop partnerships, activations and ideas that further incorporate the Bacardi brands into the worlds of music, art and film.

“For Bacardi, having Swizz as a partner represents an opportunity to sell more than just bottles and cocktails. It represents a convergence of our brands in lifestyle and cultural experiences,” said Mike Dolan, chief executive officer of Bacardi Limited, the largest privately held spirits company in the world. “Consumers are identifying with brands that fit their lifestyle in culturally relevant ways and Swizz is the perfect partner to identify and forge these new consumer connections.”

As part of the business relationship, Swizz Beatz will also represent Bacardi and its brands at numerous cultural activations in the United States and emerging markets. Platforms, venues and event details are expected to be announced as finalized.

“Besides having amazing brand recognition, great-tasting products and leadership that pushes boundaries, Bacardi has a deep heritage in music, film, culture and the arts, so they’re a great partner to help bring my vision to life. Also, I wanted to partner with a company that, like Bacardi, has a long history of giving back to the community through its philanthropic activities,” said Swizz Beatz. “As the Bacardi Global Chief Creative for Culture, I will be involved in all aspects of the product—from brand marketing and advertising to innovation and selling platforms—areas to which I will bring a new, fresh perspective.”

Conceived as an artist support platform and brought to life through a creative partnership between Swizz Beatz and Bacardi rum, the No Commission Art Fair served as a stage for established and emerging artists to display their works and showcase their passion while receiving 100% of the profits for any works that were sold. The Art Fair was a tremendous success, with art sales in excess of $1 million.

“Swizz Beatz’s talents and success extend well beyond the music world. A natural observer and strategic thinker, he has collaborated with other iconic brands including Reebok, UFC, Christian Louboutin, Lotus Cars and Aston Martin, among others, with much success,” added Zara Mirza, Head of Creative Excellence, for Bacardi.

As the drinks company looks to enhance its reputation for cutting-edge thinking, it will work with Swizz Beatz to forge deals with the most creative icons in sports, fashion, technology, art and film around the world in the coming months.

Bacardi and Swizz Beatz Team Up for Lifestyle and Culture Role added by Newsroom on July 11, 2016
View all posts by Newsroom →