By Newsroom on April 15, 2013Comments Off on Bacardi & Rafael Nadal Reveal Top-Secret Venue For “The Champions’ Party” 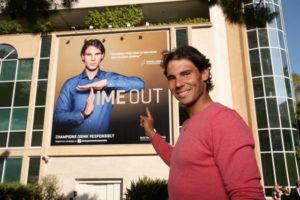 Bacardi Limited announces a stunning Mallorcan location as the venue for “The Champions’ Party,” the newest promotion in its global social responsibility campaign, “Champions Drink Responsibly.”

Fans of Nadal and supporters of the campaign only have five days left to enter the promotion for a chance to “Mix with Rafa” this summer.

Ahead of the 2013 Monte-Carlo Rolex Masters in Monaco, Rafa announced at a “Champions Drink Responsibly” event that the Bacardi Limited “The Champions’ Party,” hosted by the tennis champion, will be held at Castell de Manresa, a luxury villa on his home island of Mallorca, Spain, this July.

The promotion connects with consumers in a dynamic and engaging way to reinforce the important message that everyone can behave like a Champion by drinking responsibly and still have a great night out.

It encourages legal drinking age consumers to plan their night out, choose quality over quantity, look out for their friends and make sure everyone gets home safely.

Fans who successfully answer three questions relating to responsible drinking behavior will go into a free prize draw to win a trip to “The Champions’ Party.” Rafa has helped the “Champions Drink Responsibly” team select the exclusive 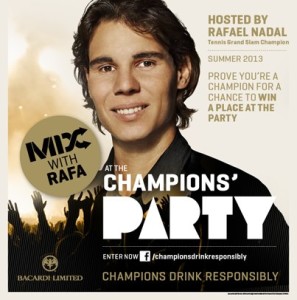 Mallorcan venue, the entertainment, music, food and, of course, drinks for the one-of-a-kind party. Castell de Manresa is located in the Alcùdia region in the north of the Balearic Island in the beautiful Bay of Pollensa.

The old fortress dates back to 1715, but has been recently restored to the highest standard by an acclaimed Italian designer.

The private estate features a kilometer of coastline and breathtaking views over the Mediterranean and the surrounding countryside.

The “Champions Drink Responsibly” team, under Rafa’s direction, will transform the luxury villa and its grounds into the “The Champions’ Party” venue for a memorable night.

In addition to “The Champions’ Party” venue reveal, Rafa launched a new “T-Sign” Facebook App in Monaco. Rafa is encouraging the “Champions Drink Responsibly” Facebook community of more than 600,000 fans to upload images of themselves and their friends replicating the T gesture hand sign.

This universal hand gesture for “Time Out” highlights important campaign messages including; take “Time Out” from drinking, book a “Taxi” to get home safe, “Keep It Together” to make sure no friend is left behind,

“Start The Night With A Plan” and stick to it, and make your next serve a “Mocktail.” 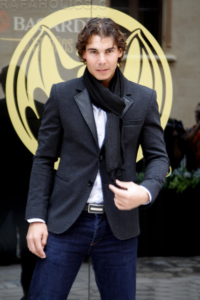 The best photos will be featured on the “T-Sign” gallery on the “Champions Drink Responsibly” Facebook page. The T gesture is featured in the latest Bacardi Limited advertising campaign featuring Rafa.

“I am really looking forward to welcoming the lucky winners to my home island of Mallorca for “The Champions’ Party” in July,” said Rafa.

“It is going to be a memorable weekend for everyone as the villa in Alcùdia is amazing. The promotion closes next Thursday, so I encourage everyone to act responsibly and enter for a chance to join me before it’s too late,” added Rafa.

“Taking Time Out from drinking is an important part of the “Champions Drink Responsibly” campaign. I want fans to support the campaign by uploading photos to the new “T Gesture” App. It is a fun way to get involved and, like me, show support for this important campaign. I will be looking out for the best images from all over the world.”

“Bacardi chose Rafael Nadal as an inspirational tennis icon who embodies the values of the ‘Champions Drink Responsibly’ campaign. We are convinced that together we can communicate the importance of responsible drinking to legal drinking age consumers around the world,” said Mark de Witte, Managing Director for a Bacardi European business unit, with responsibility for the “Champions Drink Responsibly” program in Europe.

“We are very excited about “The Champions’ Party” and we feel there is no better place to be than Rafa’s home island of Mallorca in July. There are only a few days left to enter the promotion and we hope to encourage as many legal drinking age consumers to enter before it closes on Thursday.”

Marc will work with Rafa on some delicious new mocktails, which will debut at “The Champions’ Party” in July.

Bacardi & Rafael Nadal Reveal Top-Secret Venue For “The Champions’ Party” added by Newsroom on April 15, 2013
View all posts by Newsroom →