By Newsroom on July 18, 2017Comments Off on Badass Mother Clucker Struts Her Stuff to DMX in New KFC Campaign by Mother London 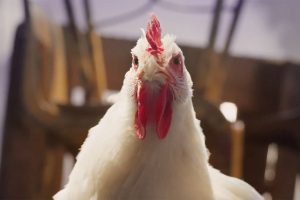 In a distinct shift in tone for KFC, the campaign proudly takes on the provenance and quality of the chicken used at KFC in the UK and Ireland. It reinforces the industry-leading work KFC undertake to ensure that 100% of on-the-bone chicken is always fresh, sourced from around 500 UK and Irish Red Tractor Assured farms, and prepared fresh all day, every day in each KFC.

The bold TVC introduces a badass chicken strutting her stuff in time to rap classic ‘X Gon’ Give It To Ya’ by DMX. There’s no mistaking who is top bird, as she wing waves, floor rocks, body pops and twerks her way around the barn – the only interruption to her owning the d-floor is a timely crow by a rooster, to make sure the festivities stay family-friendly. 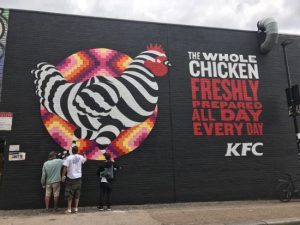 The entire film was shot in camera. To capture this display of booty shaking glory the cast of eight chickens and two cockerels spent over two weeks honing their moves. The film ends with the line “the chicken, the whole chicken and nothing but the chicken.”

The new campaign, developed by Mother, leads with TV and cinema, with an integrated suite of communications that includes PR, installation art, social media and in-store. In mid-July a prominent outdoor media space in central London will be taken over to prepare seven fresh murals over the course of a week – mirroring the constant preparation of fresh chicken at every KFC. 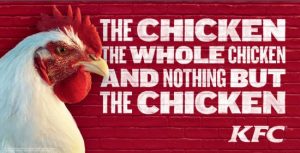 Crafted by seven renowned graffiti artist including INSA, McBess, Shotopop and Barrass, the resulting artwork will then be shared via social media to broaden reach – including the entire collection animated together with INSA’s Gif-iti app. National outdoor media follows the theme of TV, with our badass chicken photographed by James Day in a heroic pose along with the simple headline  “the chicken, the whole chicken and nothing but the chicken.” 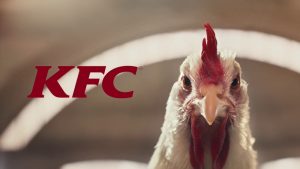 Meg Farren, CMO of KFC said: “At KFC we’re proud of our chicken, we’re not afraid to show it. ‘The Whole Chicken’ represents a step change for us, taking a bolder stance when it comes to engaging with our loyal customers and fans.”

Hermeti Balarin, Executive Creative Director of Mother added: “KFC chicken is of the highest quality. But somehow, despite previous attempts at communicating this message, people never really got it. So we created a campaign that is impossible to ignore.”

Badass Mother Clucker Struts Her Stuff to DMX in New KFC Campaign by Mother London added by Newsroom on July 18, 2017
View all posts by Newsroom →