By Newsroom on February 19, 2014Comments Off on Ballantine’s Announces Launch of New Spirit Named Brasil 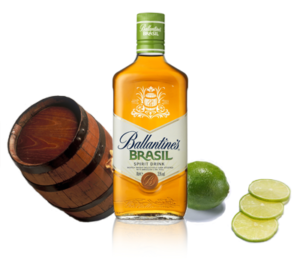 The new spirit drink is the latest addition to the Ballantine’s portfolio, and represents a fusion of the traditions of Scotland with the passion of Brazil. Featuring a combination of citrus complemented with a touch of vanilla, the taste is both smooth and consistent, with the flavours of Scotch perfectly balancing the lime.

Four more serves have been created; the ‘Glen Rio’, which fuses Ballantine’s Brasil with apple juice, the ‘Flower O’Brasil’, which mixes the spirit drink with squeezed lime and elderflower, the ‘Caledinho’, which combines Ballantine’s Brasil with squeezed lime mixed with sugar, and the ‘Glen Coco’, which builds on the Caledinho by adding a touch of coconut.

“There is a huge opportunity for spirit drinks that are made with whisky, as it’s an exceptionally dynamic new category that is already demonstrating a strong rate of growth. Ballantine’s Brasil is a venture into new territory for us, but we’re excited to have a product that can take advantage of this opportunity and one that can truly inspire those who have not yet found their perfect way to enjoy a Scotch whisky drink.”

Ballantine’s Brasil will be rolling out in key markets around the world throughout 2014, including Brazil and France.