By Newsroom on May 1, 2018Comments Off on Ballast Point Releases New Cocktail-Inspired Moscow Mule Ale US-wide 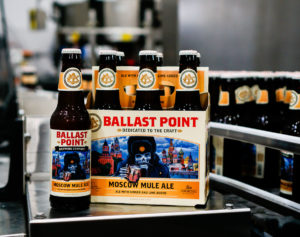 Moscow Mule Ale was born from Ballast Point’s R&D program and quickly became a fan favourite at the brewery’s tasting rooms. The 10 percent ABV ale is a tart and refreshing beer version of the classic cocktail. Loaded with lime zest and ginger over a kettle-soured base beer, Moscow Mule Ale tantalises the taste buds with tangy and effervescent flavours, finishing with a hint of spice from the ginger.

“The flavour profile of this beer is really unique. It tastes just like a cocktail, but it’s in fact beer. Our brewing team hit it out of the park with this one,” said James Murray, vice president of brewing at Ballast Point. 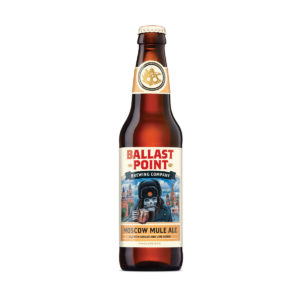 Moscow Mule Ale is a prime example of how R&D brewing has fuelled innovation and allowed Ballast Point to bring new, quality beers to the market. The brewery currently makes over 100 unique R&D recipes a year, each with innovation and quality in mind.

“The brewers at our Little Italy R&D brewery developed the Moscow Mule Ale after testing out a number of other cocktail-inspired brews like the Old Fashioned and Irish Coffee,” said Aaron Justus, Director of R&D/Specialty Brewing. “The Moscow Mule Ale was a runaway favourite among the team and our tasting room customers, making it an easy decision to share it with the rest of the country.”

The scaled-up beer is now brewed out of Ballast Point’s newest facility, called the Trade Street brewery, which opened late last year and specialises in sour and barrel-aged beers. The new facility has already produced award-winning beers, such as the Sour Wench Blackberry Ale, which won a Silver medal in the Fruited American-Style Sour Ale category at the 2017 Great American Beer Festival (no gold medal was awarded).

Moscow Mule Ale is a spring/summer limited release under Ballast Point’s Explorer series and is now rolling out US-wide in both draft and 12 oz. bottles through July.