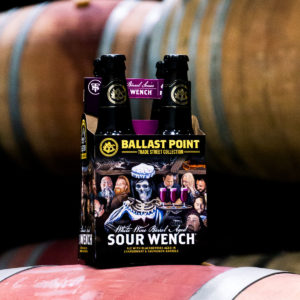 This pretty lady will make you pucker: San Diego-based Ballast Point, a pioneer in the craft beer industry and one of the US’ leading craft breweries, introduces new White Wine Barrel-Aged Sour Wench – available now nationwide in the states.

With every sip, beer drinkers will taste hints of crushed berries and ripe apricots with a buttery smoothness from the chardonnay barrels followed by a dry finish from the sauvignon cask. Easy-drinking for a barrel-aged beer, it’s tart, refreshing, and delightfully smooth.

Ballast Point Director of Barrel Ageing Steve Anderson said the goal with the beer was to add complexity while maintaining the flavour profile of Sour Wench, which won a 2017 Silver medal in the nation’s largest beer festival and competition.

“With barrel ageing, we’re giving tribute to three different attributes – the oak barrels, the wine that was in them before and the base beer,” said Anderson. “The blend that’s in the White Wine Barrel Aged Sour Wench bottles is a really nice layering of both the beer and the wine barrels, making it more complex and an amazing end product.”