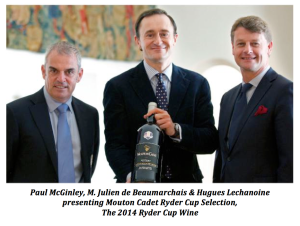 Mouton Cadet Ryder Cup Selection, made with the support of Paul McGinley, The 2014 European Ryder Cup Captain, has just been revealed. This limited edition is the official wine of The 2014 Ryder Cup at Gleneagles, Scotland.

Paul McGinley attended a special reception at Château Mouton Rothschild, hosted by M. Julien de Beaumarchais, son of the Baroness Philippine de Rothschild, President of the Board, for the reveal of The 2014 Ryder Cup wine.

Mouton Cadet Ryder Cup Selection was born from a meeting between Paul McGinley and Hugues Lechanoine, Managing Director of Baron Philippe de Rothschild SA, with the ambition to create a limited edition of Mouton Cadet especially dedicated to the event.

Hugues Lechanoine said: “Our partnership makes a lot of sense. In the same way that The Ryder Cup brings together the best American and European players, we selected twelve of the finest vine parcels in Bordeaux to create this unique wine. I would like to thank Paul McGinley for his personal support in the creation of the Mouton Cadet Ryder Cup Selection.”

Mouton Cadet Ryder Cup Selection was crafted for the event, and displays the prestigious Ryder Cup logo. A fine red wine, produced in limited quantity, it is made from a strict selection of parcels located mostly in the “Côtes de Bordeaux” area, and dominated by the Merlot varietal. For aging or for an immediate consumption, the wine presents an intense carmine red colour and a complex and elegant nose. With full roundness and powerful tannins, it offers a palate of ripe fruits, gently giving way to spices and notes of caramel and toast. 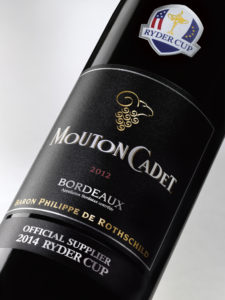 As Official Supplier to the 2014 Ryder Cup, Mouton Cadet will be the exclusive wine of the competition, in the luxurious surroundings of the Gleneagles Hotel in Perthshire, Scotland, from September 23rd to 28th. Visitors and VIP guests will be able to enjoy the limited edition in all catering venues created for the occasion.

McGinley said: “I am delighted that our initial idea of creating a Ryder Cup wine has been realised and that we now have a wine that can be enjoyed by those attending the event in September, and which will also be available to buy and accessible to all.”

Mouton Cadet Ryder Cup Selection will also be available from the month of June in some of the best golf courses and fine wine shops around the world.