By Newsroom on December 17, 2014Comments Off on Belvedere Vodka Announces Partnership With James Bond’s Film Spectre 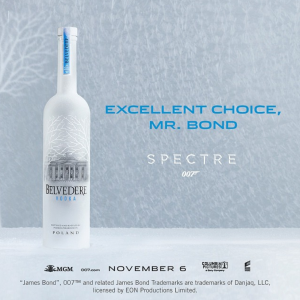 Belvedere will release two custom made and limited editions to celebrate Bond’s vodka martini ‘Shaken not Stirred,’ and its partnership with the 24th Bond adventure, Spectre. In an unprecedented move, Belvedere has replaced the iconic Belvedere Palace with the famous MI6 headquarters. Belvedere’s signature blue palette will be switched for a distinctive green, mirroring the secret spy agency’s ink of choice, creating a truly memorable collector’s edition of 100 bottles. A 007 twist will also be applied to Belvedere’s iconic Silver Saber bottles, known for their cutting edge, metallic aesthetic and illuminating technology.

Belvedere’s Spectre marketing program will include a global advertising campaign and a wide range of promotion and activation rights around the film. The marketing campaign will be launched as of February 2015, with a strong focus of efforts in on-premise establishments and retail stores across multiple 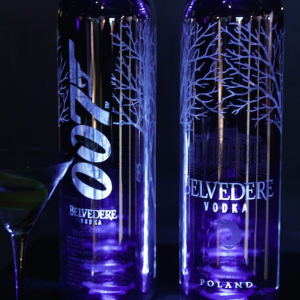 countries. Belvedere is the vodka of choice for tastemakers who Know the Difference, echoing the award-winning campaign promoting knowledgeable choices.

President of Belvedere Vodka, Charles Gibb states: “James Bond is recognized as the most admired and influential tastemaker in the world. We’re delighted that Belvedere will be partnering with Spectre, our largest global partnership to date.”