By Newsroom on September 29, 2015Comments Off on Belvoir Launches Campaign To Support The British Hedgehog 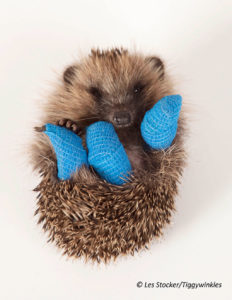 Working in conjunction with Tiggywinkles Wildlife Hospital, Belvoir is urging its consumers to do what many might have done as children and collect bottle tops.  With a nod to the classic Blue Peter milk bottle top campaigns, Belvoir is promising to donate £1 to Tiggywinkles for every one of their bottle tops they receive – hoping ultimately to raise £5,000 for the animal charity that treats thousands of injured wild animals, including hedgehogs, every year.

While they can’t promise the Blue Peter Thermometer to update on progress, there is a weekly tops total on the Belvoir website. The tops from Belvoir’s whole range of 16 Cordials and 17 Pressés are valid.

Every year in Britain, over five million wild animals are injured from their encounters with the human world. Tiggywinkles has been treating and saving them since 1978 with a specialist hospital to treat and rehabilitate as many as possible.  Those that cannot be released back into the wild are given a home in the Tiggywinkles Visitor Centre gardens.

For a company that has largely built its reputation on its original elderflower cordial, for Belvoir the hedgerow is a major contributor to its success. However, since the Second World War, the UK’s ancient hedgerows have dramatically declined due to removal to increase field size and to make way for development. There are currently only about 450,000km of hedgerow left.

This widespread loss of the traditional hedgerows is believed to be part of the reason behind the decline of the hedgehog, who as the name suggests would choose to live in the hedgerow.  In a recent survey, there are thought to be less than 1 million hedgehogs living in this country today, an estimated 30 per cent drop since 2013.  However, the loss of bushes and hedges in back gardens is also thought to have played a role in the mammal’s demise with the popularity of hard wooden or metal fences making it harder for hedgehogs to move from place to place.  As they become isolated in smaller and smaller areas of greenery they cannot feed or mate.

Pev Manners, MD of Belvoir Fruit Farms says: “Our bottle top collection is a simple way for anyone to get involved in helping to protect this Great British mammal. We wholeheartedly support the work of Tiggywinkles and are keen to hit our £5,000 target. Anyone who remembers the weekly updates from Blue Peter on their milk bottle top campaigns will remember the excitement of seeing how far the thermometer had gone up and we hope to generate a similar enthusiasm with our consumers who check into our website on a weekly basis to see our new total.”

All Belvoir’s drinks are hand made using only the finest natural ingredients; just lashings of real pressed fruit juices, flowers and spices and no preservatives, flavours, artificial colours or sweeteners in sight. Belvoir’s drinks are available to buy from most leading supermarkets, farm shops, delicatessens and independent stores, or from their website.

Belvoir Launches Campaign To Support The British Hedgehog added by Newsroom on September 29, 2015
View all posts by Newsroom →