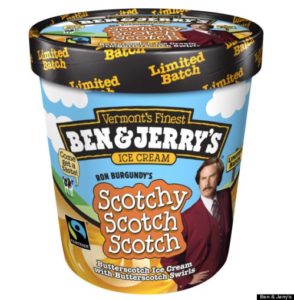 Ron Burgundy isn’t the only one who loves scotch.

In honor of the upcoming movie “Anchorman 2: The Legend Continue,” Ben & Jerry’s ice cream has unveiled a dessert themed around Will Ferrell’s titular character’s drink of choice.

The limited-edition Ron Burgundy’s Scotchy Scotch Scotch is devoid of actual alcohol, but is is a mix of suitable substitutes butterscotch ice cream and butterscotch swirl ribbons.

The Burlington, Vermont ice cream giant has a history of product tie-ins with Hollywood, including Stephen Colbert’s AmeriCone Dream for the Comedy Central host and Liz Lemon frozen yogurt, which was launched for the end of Tina Fey’s “30 Rock.”

The “Anchorman” sequel bows on December 20, but the Ben & Jerry’s treat hits shelves in the next few weeks.