By Newsroom on March 28, 2014Comments Off on Blue Chip Secures Rio 2 Movie Tie-up for MU 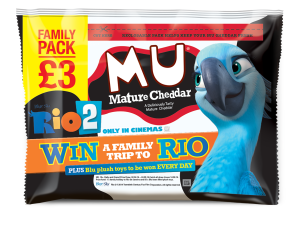 Blue Chip, the leading promotional marketing agency, has developed a strategic partnership for its client MU (owned by Adams Foods) with 20th Century Fox and the film Rio 2, the much anticipated sequel to the smash hit animated movie.

Families will be re-united with Blu, Jewel and their three kids in this Amazonian adventure, the long awaited samba-filled sequel to the 2011 hit film. The film boasts voice overs from stars including Jesse Eisenberg (Blu), Anne Hathaway (Jewel) and Jamie Foxx (Nico).

MU consumers will have the chance to win a Blu plush toy every day plus the opportunity to win a fantastic family holiday to Rio de Janeiro. To enter, consumers are invited to visit the bespoke promotional microsite, created by Blue Chip, to register their details and the last four digits of the promotional pack barcode to be entered into the daily and grand prize draws.

The activity will be live from April 1st for 12 weeks, and will feature across the full MU range, including the 260g and 400g block cheddar packs, sticks, and grated.

The promotion will be supported with a bespoke social media campaign, press advertising and extensive PR activity.

Blue Chip Account Director Rachel McHale said; “Cheddar Cheese is a commodity product with purchase decisions frequently made on price at fixture. The consistent deep cut price deals make added value stand-out a must have in order to drive cut through at-shelf. The resounding sales success of our MU and Smurfs 2 partnership, which saw a fantastic sales uplift throughout the promotional period, confirms that strong on-pack comms that sit in line with core brand strategy and specifically target our key consumers will deliver success.”

She added: “Rio 2 provided the perfect opportunity to deliver both a high value and high frequency prize pool ensuring real stand-out and cut-through at the point of purchase.”

Blue Chip works for long-term clients including Kellogg’s, O2 and Müller. The agency is currently on a major staff expansion drive and is fast making its mark in London, where it opened a new office four years ago.