By Newsroom on April 25, 2017Comments Off on Boom in Demand Sees Edinburgh Duo Forge a New Kind of Coffee Culture 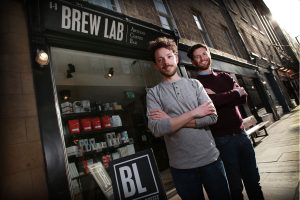 Spotting a gap in the market, the Edinburgh duo are preparing to expand with a new late night speciality offering; that seeks to challenge coffee’s reputation as a ‘daytime-only’ pursuit.

In the last 18 months, demand for speciality coffee has spiked. Independent UK operators now occupy 32% of the market, worth £7.2bn.

Since opening ahead of the curve in 2012, Brew Lab Baristas have served over 750,000 coffees; drawing on science and art to create the perfectly extracted cup.

Nitro Cold Brew Martinis and a carefully curated food menu are among the developments being rolled out in response to Edinburgh’s growing thirst for caffeine around the clock.

A commitment to ‘single origin’ sourcing – which sees Brew Lab serve coffee grown on individual coffee farms – is carried through to the new food menu; which features sourcing from independent Edinburgh producers.

From late April onwards, customers can now enjoy the Brew Lab experience after dusk, as well as I.J Mellis cheeses, filled doughnuts from Baba Budan and charcuterie from Leith-based East Coast Cured; who have chosen Brew Lab as their first stockist. 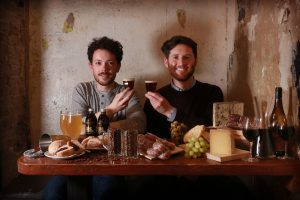 The addition of natural wines from Henri, local craft beers from Pilot and Scottish spirits from farm-to-bottle distiller, Arbikie, rounds off a considered evening drinks menu in an alternative late-night environment.

Co-founder Tom Hyde said: “The creation and launch of our new late night offering demonstrates demand and the beginning of a change in Edinburgh’s coffee culture. So whether you start the day with a short black or end it with a Nitro Cold Brew Martini, we’re excited to be at the forefront; challenging the status quo of how and when coffee can be enjoyed.”

Boom in Demand Sees Edinburgh Duo Forge a New Kind of Coffee Culture added by Newsroom on April 25, 2017
View all posts by Newsroom →