Motown Philly’s back again….this time, for Wendy’s pretzel bun. Best-selling R&B group Boyz II Men released its #PretzelLoveSongs video celebrating fans’ joy of being reunited with the pretzel bun, which Wendy’s recently announced is back this summer on both its Pretzel Bacon Cheeseburger and Pretzel Pub Chicken.

“We know all about romance, heartache, love lost and found, but we have never had the chance to sing sweet harmonies about, of all things, a pretzel bun,” said Nathan Morris of Boyz II Men. “We sing about searching for your better half on our new album ‘Collide,’ and with our #PretzelLoveSongs video, we put a humorous twist on what some fans are saying is their better half – Wendy’s pretzel bun.”

The group brings its legendary history of romance and harmony to the integrated campaign by singing lyrics sourced from customers’ actual social postings. The video, entitled “Yes, Yes, Yes!,” combines modern pop with classic Boyz II Men a cappella. The band also performs over-the-top see-say gags, such as wearing a suit and swimsuit while singing “It will improve my summer lunch game” and dancing in confetti to “Can my New Year’s kiss be with a pretzel burger?”

“We know Millennials are passionate about 90s nostalgia, music and humor—and Boyz II Men delivered on all three in its rendition of #PretzelLoveSongs,” said Craig Bahner, Wendy’s Chief Marketing Officer. “We partnered with Boyz II Men because the group and its members are legends—and it looks like our Pretzel Bun is becoming one too.” 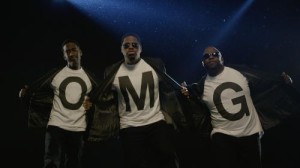 Boyz II Men’s video is the second in Wendy’s #PretzelLoveSongs video series, which is hitting the charts this summer through partnerships with Billboard, Vevo, and Spotify. Each #PretzelLoveSongs video will appear on Billboard’s most popular chart, the Hot 100, and help launch the Billboard Artist 100, the first chart to rank artist activity across the most influential Billboard charts.

Wendy’s will pass the microphone to consumers to let them sing their pretzel hearts out in a Wendy’s #PretzelLoveSongs Karaoke Booth in select markets. Boyz II Men kicked off the local activations on July 9 in New York’s Times Square. The band will surprise and delight fans, while they create their own music video singing “pretzelfied” love song lyrics to share with their friends on their own social media pages.