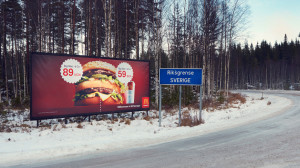 Advertising agency DDB Stockholm has created a clever billboard for McDonald’s that brings across its message in a witty, visual way.

Although Sweden and Norway are very close neighbors, prices for food, tobacco and alcohol is much higher in the latter than in the former.

To highlight how a meal at McDonald’s is cheaper in Sweden than in Norway, the fast food giant has erected a cheeky billboard that straddles the border between the two countries, splitting an image of a Big Mac burger right down the middle.

Each half of the burger is marked with how much it would cost in each country, showing how it is cheaper to grab a Big Mac in Sweden.

According to DDB Stockholm, the billboard “simply welcomes all price-hunting Norwegians to Sweden”.