By Newsroom on April 5, 2016Comments Off on Britvic Jumps on Low-Sugar Bandwagon with Reworked Drench Recipe 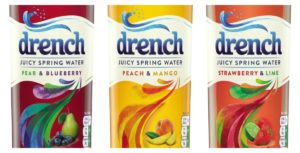 Britvic is the latest drinks company to reimagine its offering for healthier palettes with a £2m rebrand of its juice drink Drench.

Marketed at the 30+ adult market, the soft drink has received a complete relaunch with new packaging, a refreshed communications and campaign and a lower sugar recipe.

The formulation contains no artificial sweeteners, colours or flavourings. The drink instead features the naturally-sourced sweetener stevia and as such now contains less sugar than before.

Britvic stated the changes have been made “in response to the target consumers’ preferences”. Two new flavours – peach and mango, and strawberry and lime – will form the Drench flavour offering alongside the reformulated pear and blueberry variety.

The drinks will be available from mid-April.

Drench has also undergone a new packaging design, while the rebrand will be supported by a communications campaign to drive consumer awareness of the new products. The £2m marketing initiative will feature national outdoor and instore activation from June onwards.

Kevin McNair, GB marketing director at Britvic Soft Drinks, said: “We know that the typical adult consumer is leaving the soft drinks category in favour of healthier options such as tea, coffee and water but still want something tasty and refreshing, so there is certainly a need for a relevant grown-up solution to keep these drinkers in the category. We’re confident that the reformulated recipe and extensive development that we’ve put behind the relaunch of Drench will drive sales for retailers in store.”

Britvic Jumps on Low-Sugar Bandwagon with Reworked Drench Recipe added by Newsroom on April 5, 2016
View all posts by Newsroom →