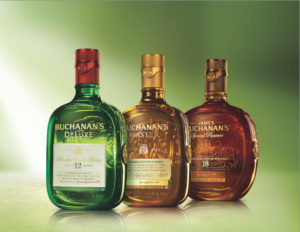 Buchanan’s is the largest premium Scotch brand in Latin America and has experienced ten-year double-digit growth in the U.S. while doubling its share over the past three years. Despite this success, the brand is updating its packaging to reflect the lifestyle of those who enjoy the brand and our modern positioning.

Founded in 1879 by James Buchanan, the whisky’s new visual identity maintains a nod to its heritage and rich history, as it propels into the future with a more contemporary look that includes cleaner labels, distinctive bottle redesigns that unify the portfolio, and bolder presentation boxes.

The new bottles reflect the brand’s distinguished premium quality and leverage its recognizable imagery. Several iconic trademarks will remain the same including the canteen shaped bottles reminiscent of the water canteens used by British soldiers in World War I, the signature red seal which represents Buchanan’s personal commitment to quality and the coat of arms meaning “Hence The Brighter Spirit” engraved on the back of the bottle to show that the high quality of product will lift the spirits of all who drink it.

“The Buchanan’s redesign reinforces the brand’s continued evolution as one of the world’s most premium Scotch whiskies,” stated Brian Cox, Director, Scotch whisky North America at Diageo. “The packaging has been updated, but Buchanan’s’ unfaltering whisky and quality remain the same. As always, we remind people to enjoy Buchanan’s in moderation and to drink responsibly.”

The new bottles will hit store shelves during the fall 2015. Buchanan’s Special Reserve 18 (SRP $75) and Buchanan’s DeLuxe (SRP $31) will begin distribution in early October and Buchanan’s Master (SRP $45) in November.