By Newsroom on August 20, 2015Comments Off on Bud Light Unveils 28 Different Team-Specific Cans for NFL Fans

Just in time for NFL Kickoff, Bud Light – the Official Beer of the NFL – is introducing 28 new team-specific cans.

Bud Light worked closely with its 28 NFL team partners to create the new team can designs for the 2015-2016 season. Each design features a customized scroll message that speaks directly to each team’s passionate fan base. The new cans are on shelves in the US now.

“The introduction of these all new Bud Light NFL team cans is a prime example of our brand’s new approach to how we work with our team partners across the league to better engage with fans via localized content and experiences. Ultimately, fans love football and the NFL, but what they really invest in emotionally each week is their individual team,” said Alexander Lambrecht, vice president, Bud Light. 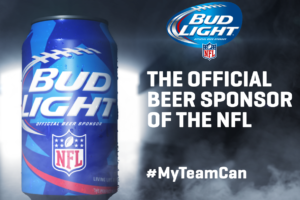 “Each of these 28 cans features a customized message that speaks directly to each team’s passionate fan base, and throughout the 2015-16 season Bud Light and its team partners will be unrelenting in delivering incredible, one-of-a-kind experiences to fans in their local team stadiums and markets.”

As the Official Beer of the NFL, Bud Light is taking a new strategic approach to its NFL sponsorship this season. In addition to the new team-specific cans, the brand recently hosted all 28 NFL team partners at the first-ever Bud Light NFL Partners Summit at MetLife Stadium in New Jersey, which focused on best practices to help teams create unique experiences and engaging content throughout the 2015 season.

Together, Bud Light and all 28 Bud Light-sponsored NFL teams will be giving fans opportunities to participate in epic surprise fan experiences during the season.