By Newsroom on August 26, 2015Comments Off on Burger King Suggests a Hybrid ‘McWhopper’ as a ‘Truce’ with McDonald’s 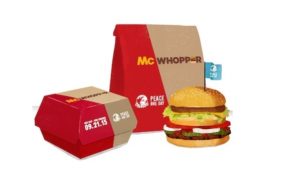 In a full-page “open letter” in the New York Times and Chicago Tribune, Burger King proposes to their competitor, McDonald’s, that they collaborate on a joint burger for world peace.

The collaboration aims to “get the world talking” about Peace One Day, a non-profit that is lobbying to designate 21 September as Peace Day. Since their mantra is “Who will you make peace with?”, Burger King hopes for a ceasefire on the “burger wars” between them and McDonald’s for this cause.

According to to their letter, the proposed result is the hybrid McWhopper, “with all the tastiest bits of your Big Mac and our Whopper, united in one delicious, peace-loving burger.” Burger King offers that a mixed crew sell the hybrid burger on 21 September, at a pop-up store at an unnamed location. 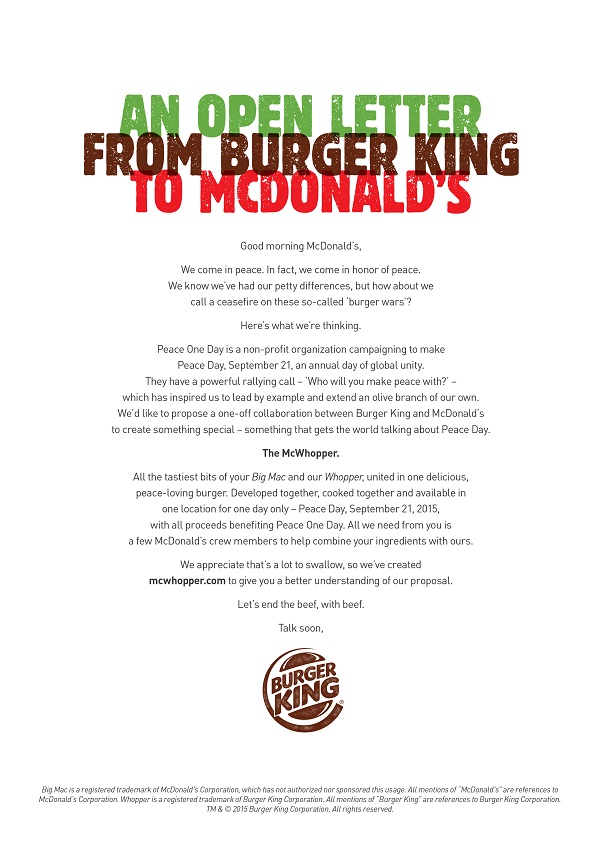 The SVP for Global Brand Management at Burger King, Fernando Machado, insists that this invitation is more than a PR stunt, and has expressed the hope that McDonald’s responses favourably.

The Golden Arches though has promptly responded, politely turning down Burger King’s proposal.

McDonald’s CEO Steve Easterbrook published the response via the brand’s Facebook page, in which he commended the initiative as a “great idea” and “inspiration for a good cause”, but ultimately declared it a no-go.

Dear Burger King, Inspiration for a good cause… great idea. We love the intention but think our two brands could…

Burger King Suggests a Hybrid ‘McWhopper’ as a ‘Truce’ with McDonald’s added by Newsroom on August 26, 2015
View all posts by Newsroom →