By Newsroom on May 3, 2018Comments Off on Burger King’s Latest Crazy Idea Asks People to Trade In Their Flights for a Whopper 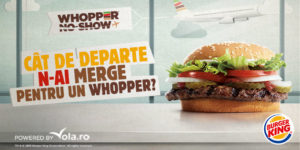 has come up with some pretty crazy stunts in its time to drum up publicity in places where it doesn’t have many restaurants — for example, helping people in France to move house in order to be nearer a Burger King.

Its latest campaign, in Romania, is perhaps the most ridiculous yet–it persuaded people to book flights but deliberately miss them in order to eat a Whopper.

So the stunt went like this: The country’s only Burger King outlet is in Bucharest airport, beyond the security check. So in order to get a meal there, you need to be flying somewhere. 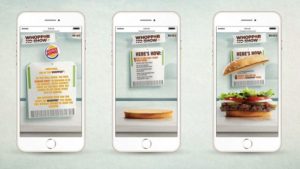 decided to help BK fans out by creating a website, Whoppernoshow.com, in partnership with Vola.ro, where customers can actually book low-cost flights (a flight to Brussels, for example, costs just 14 euros). Having purchased the ticket, the customers need to go through security, after which Burger King asks them to make a new kind of “Whopper Sacrifice” and turn their boarding passes in for a burger at the restaurant–they’re not valid until AFTER their flight takes off.

While the brand wouldn’t comment on security implications, it claims that people have indeed been redeeming the offers. 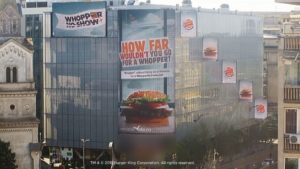 does raise the question, why don’t the people just take their cheap flights and (for the normal price of a Whopper) have their burger too?

To this, BK’s head of global marketing Marcelo Pascoa says, “We know this is a crazy idea. But our fans are crazy about the Whopper sandwich. And we are always looking for fun ways to showcase the love people have for it.”

Burger King’s Latest Crazy Idea Asks People to Trade In Their Flights for a Whopper added by Newsroom on May 3, 2018
View all posts by Newsroom →