By Newsroom on July 19, 2013Comments Off on Buxton Catches Twitter ‘Chatter’ for Ashes OOH Push 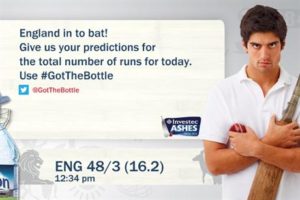 Buxton natural mineral water is promoting its sponsorship of The Ashes with a digital outdoor advertising campaign, fronted by Alastair Cook, the captain of the English cricket team and Buxton brand ambassador.

The campaign, created by Posterscope for Nestlé Waters UK, aims to keep fans informed and updated on the latest scores, news and social media conversations during the Test series.

The media activity will be driven by user-generated content from cricket fans. It will be broadcast on digital outdoor screens at rail stations in London and Manchester on match days.

The Ashes “chatter” used in the activity will be collected and collated by Liveposter from Buxton’s @GotTheBottle Twitter account.

The activity started yesterday and runs for two, five-day periods to coincide with the second and third Test matches of The Ashes from 18 to 22 July and 1 to 5 August.

Andrea Cahill, the Buxton brand manager, Nestlé Waters UK, told Campaign Live: “As a key sponsor and supporter of such a major event, we wanted to drum up as much energy and enthusiasm as possible and get the public fully engaged.”

The outdoor activity is part of Buxton’s ‘Who’s Got the Bottle’ campaign, which features a tie-up between The Times in the UK and The Australian newspaper.

Anishka Fernando, a client manager, Posterscope, said: “This is a perfect example of how outdoor is playing an increasingly important role as the key link and driver of consumer engagement and interaction, with brand campaigns from offline to online media channels.”

Separately, property site Prime Location, an official partner of the Test match grounds, has also launched a campaign to encourage fans to support the English cricket team and #KeepTheAshesAtHome.

The property website has rolled out a video to encourage cricket fans to share their own inspirational messages of support for the team. The video, messages and images can be viewed on the ‘Wall Of Support’ website.

Alex Chesterman, the chief executive office of PrimeLocation, said: “We’re hoping that our campaign will really capture the imagination of the great British public, encouraging them to come together, keep that feel good factor going and help our team score a hat trick against Australia.”

Prime Location has also compiled a list of the top 10 most exciting Ashes matches of all time along with an interactive infographic for fans to explore pivotal moments in the history of English Cricket.