By Newsroom on April 29, 2016Comments Off on Cabana Launches Outdoor Advertising Campaign 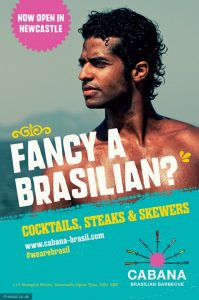 Appearing across carriage cards on the Tyne and Wear Metro network including high impact sheets throughout Newcastle station, the adverts feature the slogan ‘Fancy a Brasilian?’

The ads by Transport Media will be supported by social media activity. Larger 6 sheet posters will be on display in June as Cabana looks to turn up the heat in Newcastle City Centre ahead of the summer period.

The campaign will capture a highly targeted local audience with an aim to promote the newly-opened Newcastle branch of the chain as the home of Brasilian dining.

Cabana Newcastle is the chain’s tenth restaurant in the UK, with several already established locations across London and sites in Leeds and Manchester.

Managing Director of Transport Media’s parent company Media Agency Group, John Kehoe, said: “Media Agency Group is delighted to be continuing its work with Cabana, raising awareness of the new Newcastle-based restaurant during its initial period of opening. The colourful advertisements will be on show in some key locations across the city and the Metro network, reaching a large and diverse audience. We’re looking forward to seeing how the campaign performs over the coming weeks and we’re confident that it’ll be a great success.”