Halloween weekend bats, black magic and BPM collided in the Bermuda Triangle to create a music experience like no other on earth. Over three action-packed days Bacardí Triangle delivered poolside sets from world-class DJs, a spectacular Black Magic Halloween party headlined by AC Slater and a handpicked artist line up that took the party through to the early hours night after night. 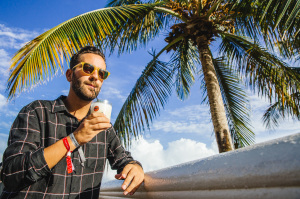 This epic music adventure, curated by Bacardí rum, is the latest move in the Bacardí: Untameable Since 1862 campaign. The event came to a thrilling end on its final night as Calvin Harris, Kendrick Lamar and Ellie Goulding took to a stage set on a private island in the heart of the Bermuda Triangle.

Ellie Goulding kicked the evening off with an hour long set jammed with infectious hits from her multi-million selling album Halcyon. ‘Burn’ and ‘Anything Can Happen’ were stand out tracks from a stand out performance. As darkness fell on the Caribbean night, everyone there knew they had seen an artist at the very top of her game. 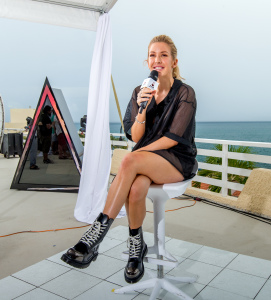 Arguably the hottest rapper in the world right now, Kendrick Lamar, had the crowd in a frenzy from the second he took to the stage. As the opening refrain of new single ‘I’ dropped, the shaking of the island beneath the crowd’s feet was unmistakable. With the follow up to Good Kid M.A.A.D. City expected to be announced any day now, Lamar is set to have the world at his feet.

As midnight approached the excitement from the crowd was palpable. Calvin Harris, the biggest DJ/ Producer in the world, appeared on stage to the greatest roar of the weekend. 18 Months and its string of monumental hit singles was accompanied by an audio visual show typical for festivals of 100,000, but here it was for an exclusive group of 1,862.

As befits a brand with an unrivalled drinks heritage, Bacardí gave the same attention to the cocktails as the incredible music roster.  Some of the world’s best bartenders were brought in to curate drinks menus that showcased the full range of Bacardí rums. 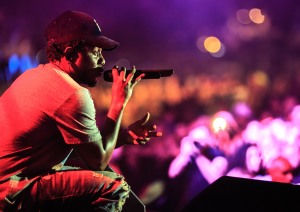 “Bacardí Triangle has been a new kind of music experience for modern music fans,” said John Rash, Global Music Director, Bacardí. “Music has always been a part of the Bacardí DNA and we wanted to create an event that brought together music and travel in a way that no one would ever forget. We flew in guests from twenty four cities around the world to come together and unleash their irrepressible spirit.”

Bradley Thompson of festival producers Broadwick Live (Festival No. 6, Snowbombing) said, “We worked with Bacardí from day one to curate a three day adventure that combined three awesome elements:  world class music, world class fans and an exotic destination.   It was an ambitious project that was nothing short of inspiring.”