By Newsroom on July 20, 2016Comments Off on Captain Morgan Asks the US to Allow Under 35s to be President

Millennials have replaced Boomers as America’s most populous and most influential generation, with more than 75.4 million in the US alone. Ranging from 21-34, some of our country’s most important technological, creative, and economic advancements can be directly attributed to this age group. Yet the very people who are changing the face of the nation are ineligible to hold the nation’s highest political office.

Captain Morgan announced a petition for Article II, Section I of the United States Constitution to be changed, which states that “neither shall any person be eligible to [the office of President] who shall not have attained to the age of thirty-five years.” True to its namesake’s pioneering and adventurous spirit, the Captain Morgan brand will unite everyone to bring a new voice to the election, in an attempt to pave a way for Under 35s to be President of the United States.

More than half (52%) of 21-34 year olds say lowering the presidential age requirement would be beneficial for the country, and a clear majority of those polled – 56% – say they would be willing to act on this idea by supporting an amendment to lower the age requirement. 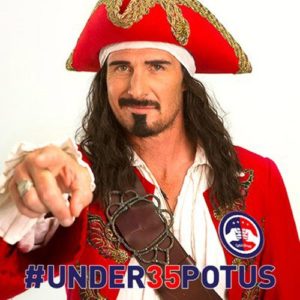 “It’s no secret that Millennials have gradually been disengaging from the political process. The fact that there are very few elected Under 35s on Capitol Hill is symbolic of this disengagement, and bringing more young adults into the democratic system can only make our nation better,” said Adrienne Cuschieri Grooms, 33 year-old Senior Brand Manager, Captain Morgan.

“It’s not like we’re trying to create change for the sake of change. This is a very real and important issue. Millennials make up some of the most progressive, innovative, intelligent, and successful people in our country – why shouldn’t they be able to be President of the United States?”

Elliot Sanchez, 29-year old CEO and Founder of mSchool, an education technology company that creates new distributed learning technologies, was the first person to sign the petition to lower the age requirement for office of the President.

To join the movement, adults 21+ are encouraged to visit UNDER35POTUS.com, which will automatically direct them to ‘We the People’ on petitions.whitehouse.gov in order to sign the petition. If 100,000 signatures have been acquired by August 17, 2016, the White House will review the petition, distribute it to appropriate policy officials and issue a response.

In addition to Sanchez, Captain Morgan has recruited a crew of influential Under 35s who are making an impact and changing the world in their own right, to support the cause including:

While the online petition at UNDER35POTUS.com is the hub for adult consumers to participate in the campaign, Captain Morgan will also have experiential marketing via a campaign bus touring the country, digital and social media, and grassroots activation. Those interested in following the conversation and supporting Under 35s having a larger role in future Presidential races can follow #Under35POTUS.

In 2016, as you embrace your inner Captain spirit and work to make a difference, be it in your local community or on a national scale, always remember that when raising a glass, to do so responsibly. 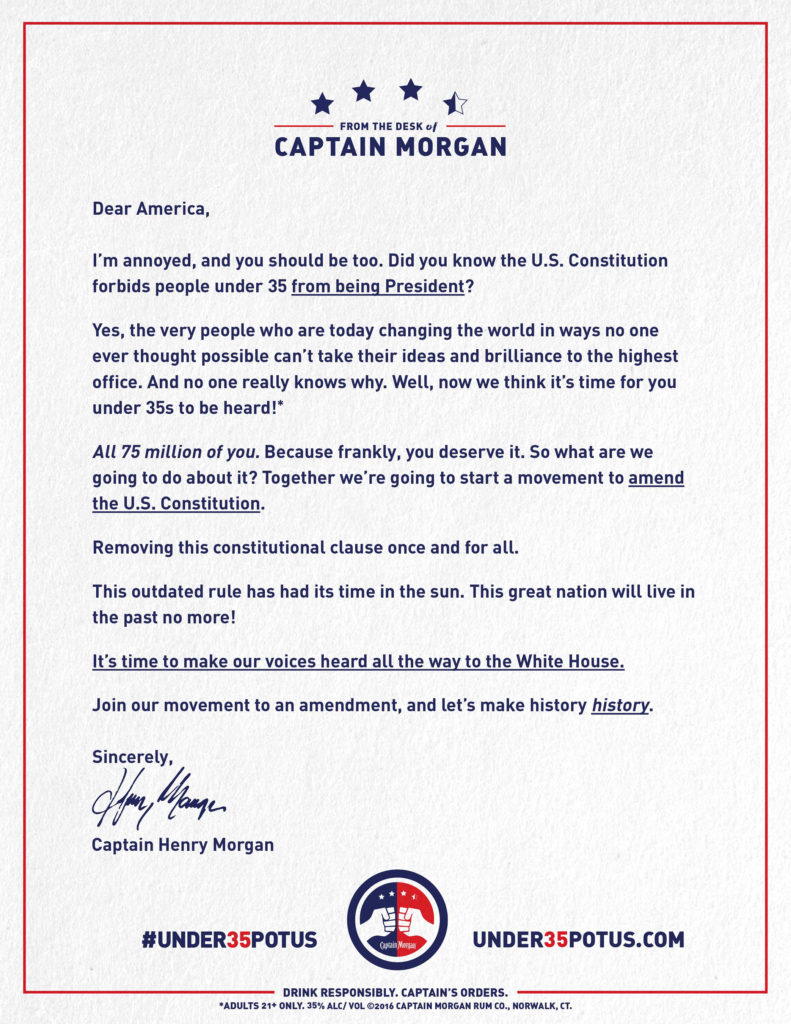 Captain Morgan Asks the US to Allow Under 35s to be President added by Newsroom on July 20, 2016
View all posts by Newsroom →