By Newsroom on August 24, 2015Comments Off on Carling Cider Gets Crafty with Giant Mural Made Entirely of Apple Stickers 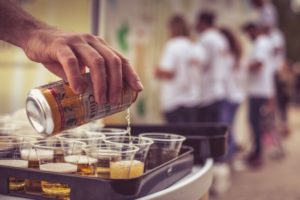 From August 20th to 24th, Carling will turn artist and take to London’s Southbank to promote Carling British Cider.

The promotion will see a giant mural made entirely of apple stickers take stage on London’s Southbank.

The ‘Only the good ones get in’, mural is part of the Carling British Cider campaign created by Creature of London and was born from the idea that as so many quality, hand picked apples are squeezed into every pint of Carling British Cider, there are thousands of apple stickers going spare.

And what better use of them than to create a giant piece of art? The mural will be a tongue-in-cheek commemoration: ‘to all those apples that gave their juice to Carling British Cider: thank you, from the bottom of our barrels’.

Head to the Southbank’s Observation point for a free sample and a spot of free art.

Carling Cider Gets Crafty with Giant Mural Made Entirely of Apple Stickers added by Newsroom on August 24, 2015
View all posts by Newsroom →