By Newsroom on September 4, 2013Comments Off on Carling Pokes Fun at Apple in New Ads 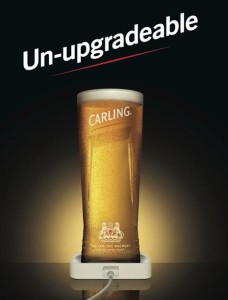 Carling is poking fun at Apple in the latest phase of its £9.6m marketing strategy to recapture the humour of its 90s ads.

The brewer is rolling out print ads, created in partnership with advertising agency Creature, featuring a pint of Carling in an Apple-style docking station with the strapline “Un-upgradeable”.

It then mimics literature used by the technology firm and network providers in their own ads to explain the specs of the beverage.

It reads: “A pay as you go package, delivering full flavoured taste and perfect refreshment. The slickest, swipe-iest model on the market. And with a straw it’s handsfree. Get connected at Carling.com.”

The ad is the latest from the Carling’s “Refreshingly Perfect” campaign, which launched earlier this year to return the brand to its more blokeish positioning and appeal to younger drinkers. It has bolstered its ties to music over the summer with activity at festivals such as V as well as looked to tap into the buzz around high-profile events such as the birth of the Royal baby.

Carling’s Apple spoof follows a similar attempt by Carlsberg earlier this year to launch its Somersby Cider brand in the UK. The brewer created an ad that was made to look like it was shot at the launch of a new Apple product. It featured product-savvy workers talking customers through the various characteristic of the beer and used the tagline “Less Apps, More Apples”.

Carling Pokes Fun at Apple in New Ads added by Newsroom on September 4, 2013
View all posts by Newsroom →