By Newsroom on May 23, 2016Comments Off on Carlsberg Puts Pubs at the Heart of its UEFA Euro 2016 Sponsorship

Carlsberg is putting pubs at the heart of its Official Beer sponsorship of UEFA EURO 2016 and the England team, with just three weeks to go until the tournament kicks off on 10 June. 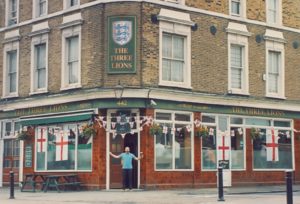 The brewer has created two pub-focused activations to get the nation excited about the tournament and to support pubs and bars, with Carlsberg UK insight revealing that football tournaments are worth +£60 million to the on-trade and live football can add an uplift of 60% to an outlet’s rate of sale.

A new online film titled ‘Substitute Pessimism for Optimism’ is set in a fictional pub called The Three Lions and encourages England fans to get behind the national team and to look forward to what promises to be an exciting tournament for football fans.

Plus, continuing the on-trade theme, pubs up and down the country with names such as The Red Lion and The Three Horseshoes will ‘pubstitute’ their traditional signage for a new ‘The Three Lions’ fascia. The bespoke pub signs feature a group of England players – including strikers Wayne Rooney and Jamie Vardy and goalkeeper Joe Hart. 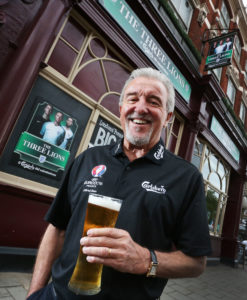 Former England manager Terry Venables kicked-off The Three Lions pub sign initiative at the Famous Three Kings pub in Fulham. Over the coming weeks handpicked venues from pub companies including Stonegate, Enterprise Inns and Punch Taverns will have their signage transformed, while selected pubs will also see launch visits from a football legend, including Phil Neville and Kieran Dyer.

Liam Newton, Vice President Marketing for Carlsberg UK, said: “We’re using our brand credentials and unique role as the Official Beer of UEFA EURO 2016 and the England team to support pubs to deliver an incredible experience for their customers, beer-lovers and football fans over what promises to be a huge summer for the on-trade.” 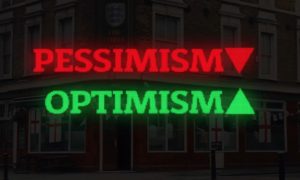 Earlier this month Carlsberg UK customers benefited from the brand’s sponsorship of the tournament with 10,000 point of sale kits made available to publicans throughout England, Wales and Scotland. Exclusive sponsorship assets such as England player imagery and UEFA EURO 2016 branding feature in the packs that include fixture posters, planners, flags and wigs to help add to the consumer buzz surrounding games.

Carlsberg UK’s Premier Sports Club has also been re-launched as a digital support tool in time for the tournament and will provide a range of tools including exclusive social media content to help drive consumers to their outlet.

Carlsberg Puts Pubs at the Heart of its UEFA Euro 2016 Sponsorship added by Newsroom on May 23, 2016
View all posts by Newsroom →